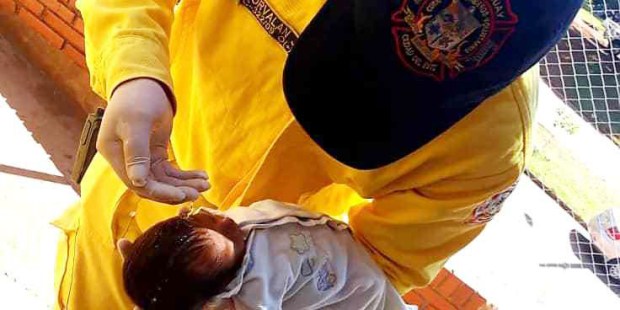 When ordinary attempts to resuscitate her failed, an ex-seminarian volunteer fireman baptized her, and she began to cry.

On October 24, In Ciudad del Este, a city in Paraguay, first responders received a phone call about a one-month-old baby in distress. The ambulance that arrived to help was manned by a team of three volunteer firemen (in addition to the driver), including Jorge Corvalan, who, coincidentally, had been a seminarian.

Corvalan told Aleteia that when they arrived, the infant was in the arms of her mother, a 13-year-old girl of indigenous origin who was begging on the streets. The infant’s life signs were almost imperceptible.

“The little baby was between life and death. We put her in the ambulance and took her to the city’s trauma center. On the way, we tried to resuscitate her, but we had no success,” Corvalan explained.

When they arrived at the hospital, the fireman asked a nurse to bring him water so he could baptize the baby.

“In case of emergency, anyone can baptize. I figured it was time to place the child in God’s hands, so that’s what I did,” Corvalan said.

The fireman said that after saying the words of the sacrament, “I baptize you in the name of the Father, and of the Son, and of the Holy Spirit,” the infant began to recover her vital signs. As the Facebook page for the city’s firemen puts it, “The baby miraculously and incredibly reacted before our eyes.” Corvalan told Aleteia, “When I put her back on the stretcher, she cried. It’s a very encouraging sign in these cases.” She was immediately admitted to the Pediatric Emergency Ward of the hospital.

Corvalan returned hours later to the pediatric wing of the hospital, where the doctors told him that the baby’s health was improving. Whether or not it was technically a miracle, Corvalan and his colleagues were God’s collaborators in saving the life of that baby.

The post on the firemen’s Facebook page concludes: “Maybe it’s very hard to believe, or it was just chance, but what we’re sure and thrilled about is that today a little child from our city is part of one of the most moving and emotive stories of our institution!”