The Iron Crown of Lombardy: The third-class relic that crowned 47 Holy Roman Emperors 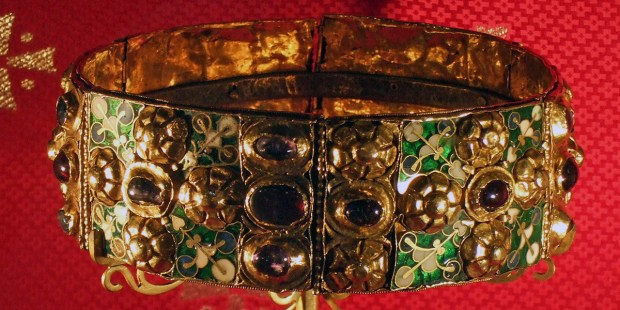 This venerated relic is thought to contain one of the nails of the True Cross.

There are many thousands of relics in existence today, many of which are housed within the altars at the majority of Catholic churches. Few relics, however, are as celebrated as the Iron Crown of Lombardy, which is believed to have been created from one of the nails of the True Cross. During the Crucifixion, Christ was pierced with three nails, and as these nails came in direct contact with the flesh and blood of Christ, they are considered first-class relics.

The Iron Crown of Lombardy is both a reliquary and a royal insignia. For over one thousand years the circlet was used to crown the kings of the Italian peninsula, as well as the Holy Roman Emperors. It is believed to have been constructed for Constantine the Great shortly after his mother, St. Helena, discovered the True Cross in the 4th century.

The crown changed hands many times over the first few centuries, be it by gift or plunder, but it eventually came into the possession of the Goths, who passed it to the Lombards when they invaded Lombardy (now Italy). The crown was taken up by the 6th-century Lombard king, Theodoric, and records exist of its use in the coronations of all Italian kings from Charlemagne (9th Century) all the way until Ferdinand I of Austria (1838).

Today, the Iron Crown of Lombardy is housed within the Monza Cathedral in Northern Italy. It is constructed from six gold segments, partially enameled, and adorned with 22 gemstones that accent the ornamented golden design. The crown is too small for an adult’s head and there are two prevailing theories as to why. The first suggests that the crown was originally an armlet, or a votive crown, meant for decoration rather than wear. The second theory states that the crown was larger, but has lost two of the golden segments. This theory is supported by historical documents.

In 1993, the crown was subjected to scientific testing, which discovered that the “iron” nail, which fits the golden segments together, is made of 99% silver. This silver then cannot be the nail of the True Cross — unless the Romans were feeling extremely generous at the Crucifixion — but records from the 12th century suggest that the Iron nail was placed over the crown, in an arch.

As with so many of our ancient relics, personal devotions of the faithful add to its value and overall meaning.