Pope Francis spoke about how God works in and with little things, as he reflected in his homily at Casa Santa Marta on December 3 about what could be called “the day of littleness.” To emphasize the point, he spoke of how he loves hearing the confessions of children, because there is a spiritual lesson to learn from them.

The first Reading, taken from the book of the Prophet Isaiah begins with the announcement, “On that day, A shoot shall sprout from the stump of Jesse, and from his roots a bud shall blossom. …”

“The Word of God sings the praises of what is small,” the pope said, “and makes a promise: the promise of a shoot that will sprout. And what is smaller than a sprout?”

Redemption, revelation, the presence of God in the world begins like this, and is always like this. The revelation of God is made in smallness. Smallness, both humility and so many other things, but in smallness. The great seem powerful — let us think of Jesus in the desert, [and] how Satan appears powerful, the master of the whole world: “I will give you everything, if you…” The things of God, on the other hand, begin by sprouting, from a seed, little things. And Jesus speaks about this smallness in the Gospel.

“The Spirit chooses the small, always,” the pope said, “because He cannot enter into the great, the proud, the self-sufficient.”

The Holy Father said that everyone has to remember this — from theologians, to pastors, to ordinary people.

For example, those who study religion might know a lot of facts, but if they are not small: “They know everything, but they are incapable of doing theology because theology is done ‘on one’s knees’, making ourselves small.”

Regarding a pastor, “whether he be a priest, bishop, pope, cardinal, whoever he might be, if he does not make himself small, he is not a [true] pastor,” but rather an office manager.

This is true of everyone, Francis said, “from those who have a function that seems more important within the Church, to the poor old lady who performs works of charity in secret.”

Pope Francis clarified that this smallness isn’t faintheartedness – that is, being closed in oneself – or closed in fear. On the contrary, he said, “littleness is great,” precisely because it is not afraid to take risks, since it “has nothing to lose.”

He explained that “littleness” leads to magnanimity, because it allows us to go beyond ourselves, knowing that God is the reason for greatness.

The Pope then turned to St Thomas Aquinas, who, in the Summa, explains how Christians, though they recognize their own littleness, must behave in the face of the challenges of the world, so as not to live as cowards. He summarizes St Thomas as saying, “Don’t be afraid of great things” — and notes that the Saint of the Day, St. Francis Xavier, the saint that Francis wanted to follow as a missionary in Japan, shows us the same thing.

“Don’t be afraid, go forward; but at the same time, take into account the smallest things, this is divine.” A Christian always starts from smallness. If in my prayer I feel that I am small, with my limits, my sins, like that publican who prayed at the back of the Church, ashamed, [saying], “Have mercy on me, a sinner,” you will go forward. But if you believe that you are a good Christian, you will pray like that Pharisee who did not go forth justified: “I give you thanks, O God, because I am great.” No, we thank God because we are small.

Pope Francis concluded his homily by saying how much he likes to hear confessions, especially those of children. Their confessions, he said, are very beautiful, because they talk about concrete facts.

So, for example, the pope explained, a child might confess, “I said this word” — and then repeat it for you. Francis described this as “the concreteness of that which is small.” This can be an example of how we should approach God: “Lord I am a sinner because I have done this, this, this, this… This is my misery, my littleness. But send your Spirit so that I might not be afraid of great things, not be afraid of you doing great things in my life.”

Enjoy a selection of our beautiful images of Pope Francis with children. 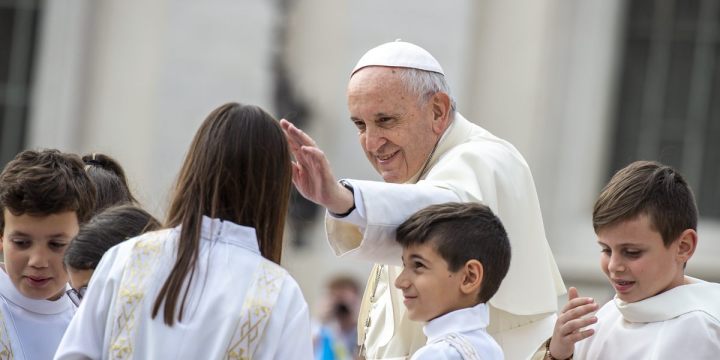