How a simple act of kindness by one friar inspired generations to serve those most in need.

In the cold darkness before dawn, just across the street from FDNY Engine 1 Ladder 24 in Manhattan’s Garment District, a giant wrought iron gate was unlocked so that a group of stout-hearted volunteers could prepare to serve the poor and the marginalized on the city’s icy streets.

Founded by Brother Gabriel Mehler of the Franciscan Friars of the Holy Name at the St. Francis of Assisi Monastery on 31st Street, the St. Francis Breadline has been providing meals, necessities, and respect at 7:00 a.m. every morning since September 26, 1930, and has become one of the countless Catholic institutions that are a part of New York’s DNA. It also proudly bears the distinction of being the longest continuous running breadline in the nation’s history, thanks to the perseverance of hundreds of priests and volunteers over the span of its 90 years.

But it’s unlikely that Brother Gabriel, a humble porter at the Monastery, would have foreseen what his loving actions would set in motion — any more than the world would foresee the devastation of the events of the previous year that moved him to action. 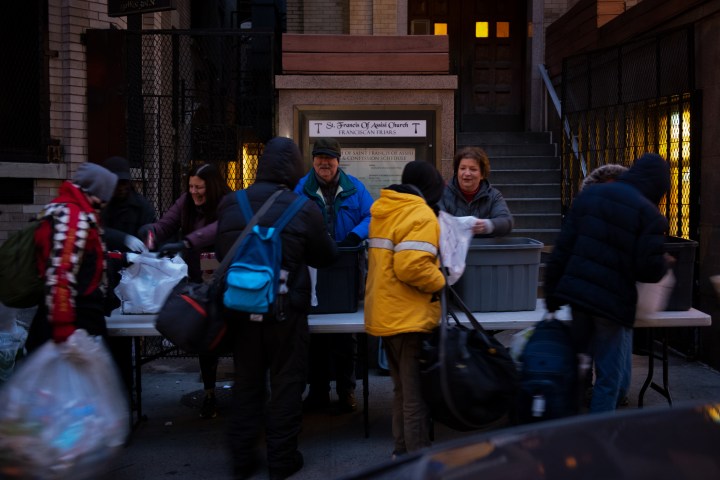 On October 24, 1929, also known as “Black Thursday,” the event that triggered the collapse of industrial America had occurred. After years of growth, stock prices grew to unreal valuations and were sold off at scale. This was followed by a second mass sell-off five days later causing the greatest crash in the history of Wall Street.

Within a few months of its opening, the St. Francis Breadline was feeding more than 1,000 people per day.

As the economy rebounded during the Second World War the initial crisis subsided, but the massive influx of immigrants and refugees, coupled with the steep rise in the city’s population, continued to oppress those in the lower strata and the breadline continued to serve hundreds each day.

And even today, as affluent as the metropolis has become, poverty still runs rampant in the back alleys and subway tunnels, and the line still forms around 6:45 each morning.

Today the legacy of Brother Gabriel that proclaims the innate dignity of every man, woman, and child lives on through the hands of others.

“Would you like a cup of coffee?” asks longtime volunteer Dorothy Davis, with all the charm and joy of the world in her eyes. “You’ve come at a good time, because Emily (also a volunteer) brought cookies for my birthday!” The volunteers come from all walks of life, and form a family with those they serve beside as well as those they serve.

“They’re all wonderful people. It’s crazy, it’ll be pouring rain out, or snowing, but they come here before they get to work just to give back … to serve,” says Program Coordinator Adam Cross, a fine artist and professor at the New York Academy of Art by day, a servant to the poor before dawn. The volunteers, just like Clark Kent, have their regular lives during the day but become superheros to those in need when it’s required.

Brother Gabriel, inspired by Grace, improved the lives of millions. It’s not a new story. It’s the story of what can happen when we act upon an inspiration and cooperate with Grace just as his forebear St. Francis did, and Christ himself did.

For information for how you can support the St. Francis Breadline visit: https://stfrancisbreadline.org/