Exclusive photos: Witness the Feast of the Holy Innocents on the streets of Manhattan

New York City celebrates the lives of the First Martyrs with this epic procession.

On an uncharacteristically mild morning in the Midtown, the sun bathed the streets with its warming rays, causing the hibernating apartment dwellers to take to the streets to enjoy the unusually warm midwinter weather. As they strolled past the storefronts whose creaking gates were being rolled open by shop owners, they were greeted by a sight that occurs only once each year and brings those who witness it to a dead stop …

There was a time when seeing a religious sister or priest on the street was commonplace, but in 21st-century New York it’s something that’s grown quite rare. That’s one of the reasons that the commemoration of the Feast of the Holy Innocents, a traditional Christmas-week event, is such a special day. Hundreds of clergy and religious from throughout the city gather at the Shrine Church of the Holy Innocents to join in an inspiring procession. 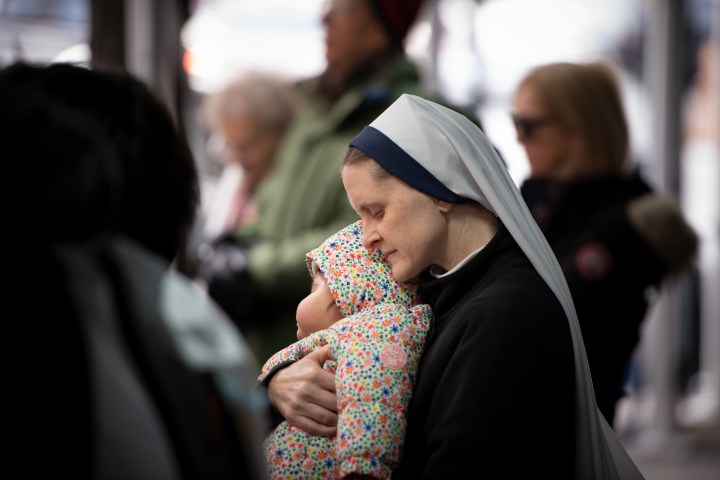 The procession begins on West 37th Street and winds its way up to 42nd Street, where it heads crosstown to Second Avenue and then pauses to pray the Rosary for those whose lives are most vulnerable.

“Brothers and Sisters, in religion, we know that when we wear the habit, wherever we are, we are giving a witness to Christ …,” stated Fr. Fidelis of the Franciscan Friars of the Renewal in his homily in the Mass that preceded the procession “and please God, as we process across midtown Manhattan, everyone who sees us will be reminded, that God is real, God is present and that God’s Grace is calling us …”

To witness hundreds of flowing habits and Roman collars making their way through the corridors of concrete and steel is breathtaking. It’s a visual portrayal of the life of Christ alive and moving in the hearts of those who responded to His call in a city that often has neglected its own spiritual life. It brings the truth of the Church directly into the public square in a powerful way.

The Feast, which occurs during the Octave of Christmas, recalls the slaughter of all the male children in Bethlehem at the orders of a fearful and jealous King Herod, after he realized that the Wise Men from the East had not returned bearing information as to the newborn Jesus’ whereabouts.

Read more:
What does Rachel “weeping for her children” have to do with the Innocents, or with Mary?

St. Stephen is often referred to as the first martyr of the faith, but the Holy Innocents are considered the first martyrs in that they were sentenced to death out of a deep hatred for Christ while Jesus was still a tiny baby.

Today the Holy Innocents are hailed as the patron saints of babies and the innocent.

Holy Innocents, please pray for us.