In a stunning example of inclusion, Jaime Martinez's family has found a way to support him in pursuing opportunities.

Jaime Martinez is one of those rare people whose favorite hobby has turned into his profession, although he may not be entirely aware of it. Jaime is 25 years old, and autistic. With the loving support of his family, he’s been able to design a successful line of socially conscious fashion and home products. 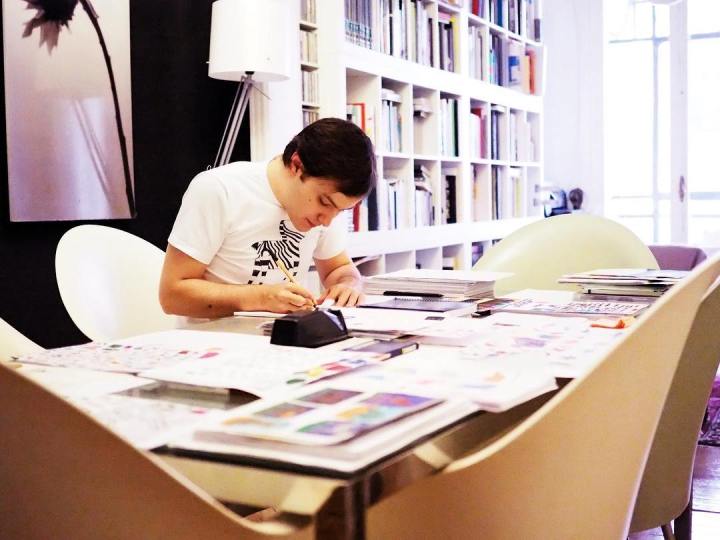 At home, drawing is a big part of his family culture. His mother, Sole (short for Soledad), is a fashion designer, and his father is an architect, so pencils have long been a part of Jaime’s daily life.

“Since he was very young he’s liked to draw, and little by little it has become his main activity,” his mother says.

A form of expression

For people with autism, for whom communication and dealing with others can be a great challenge, developing another form of expression is very beneficial—even more so when they enjoy it as much as Jaime does drawing.

Watching him draw is engaging. His concentration on lines and colors reflects the passion he puts into each of his drawings. In his artwork, you can appreciate Jaime’s special sensitivity.

During a summer when Jaime was spending lots of time at the beach and drawing more than ever, “Algo de Jaime” (Something from Jaime) was born—a brand of products that bear his drawings.

When family and friends encouraged Jaime’s parents to create something from his drawings, his family launched a series of T-shirts with some of his animal designs. The shirts were so popular that the family registered the brand, created a catalog, and increased production.

This family business project is unusual, however, in that everything revolves around Jaime, and everything must be adapted to his needs.

His father explains this in his blog, which is part of the project:

“We believe in Jaime and in the potential of his work, and we bet on him just as we would on any other designer … but Jaime is somewhat unique. He doesn’t work 8 hours a day from Monday to Friday, nor is he capable of taking orders or commissions. He does what he wants and when he wants; what we do is value his work and make it profitable.”

What his family is doing with their business is a stunning example of inclusion. The necessary means and support are made available to those who need them, thus adapting the environment to offer them the same opportunities.

“May they all be one, as you and I are one” (John 17: 21-23). When speaking of the period they were going through before creating “Algo de Jaime,” Sole refers to this verse from the Gospel, on which the Focolare Movement, to which she belongs, is based. She says,

“Jaime was having a bad time. He was nervous. He suffered many epileptic seizures, in spite of taking a lot of medication. Consequently, the family atmosphere was also tense. Thanks to a new doctor and a change in focus, Jaime’s attitude changed. He relaxed, and that improved the family dynamics, facilitating Jaime’s well-being and everyone else’s.”

Complicated situations like these highlight the importance of family unity. Moral support and feeling loved are key to overcoming difficult and unexpected situations. Family is a fundamental pillar for every human being.

The family business is also a socially conscious one: It’s a project for economic development focused on solidarity, based on the “Economy of Communion,” which is also characteristic of the Focolare Movement.

The company allocates 100% of its profits to solidarity projects to improve the quality of life of people with autism. Jaime’s mother explains that his “main shareholder is God and the benefits are for Him.”

But their commitment doesn’t end there. “Algo de Jaime” is also present on social media, specifically on Instagram (@algodejaime). On the family’s account, we can see Jaime’s daily life and photos of his products.

Society is increasingly becoming aware of how much people with cognitive disabilities have to offer. Jaime’s family offers a great example of inclusion and integration, inspiring other families and companies to adapt their environments to allow more people to contribute.

Read more:
Classmates of an autistic boy amaze everyone at his graduation

Read more:
How one 4th grader explained his autism to classmates (VIDEO)