What to mourn for, in order to be one of the “blessed are those who mourn”: Pope explains 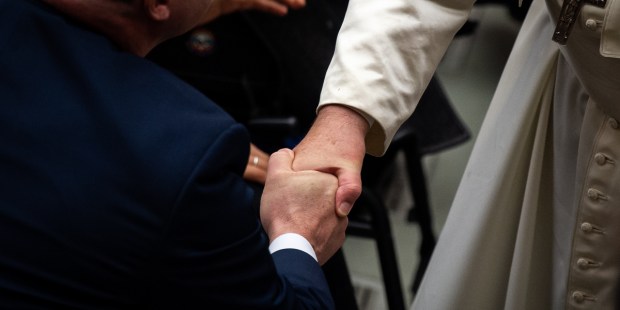 “There are the afflicted to console, but sometimes there are also the consoled to afflict,” quipped Pope Francis as he continued his catechesis series on the Beatitudes, considering “Blessed are those who mourn, for they shall be comforted.” There are those who “have a heart of stone and have forgotten how to weep,” Francis said, and there is a need to “reawaken people who do not know how to be moved by the pain of others.”

In reflecting on the second beatitude, the pope explained that in the Greek, the verb is active, not passive. It is not that the blessed are subjected to mourning, but rather that they grieve and weep, inwardly.

The pope explained that this mourning, as Scripture understands it, is expressed at the death or suffering of another. But it can also be expressed over sin: “tears shed over sin – for our own sin, when the heart bleeds for the pain of having offended God and one’s neighbor.”

Mourning at sin is different than getting angry over making a mistake: “That is pride,” the pope explained, contrasted with those who “mourn the evil done, the good omitted, the betrayal of the relationship with God.”

Pope Francis said that understanding sin is “a gift from God.”

“Let us think of the weeping of Saint Peter, which leads him to a new and far truer love: they are tears which purify, which renew. … We, by ourselves, are unable to understand sin. It is a grace we must ask for. Lord, may I understand the evil I have done or that I can do. This is a very great gift and after we have understood this, there comes the grief of repentance.”

One of the first monks, Ephrem the Syrian, says that a face washed with tears is unspeakably beautiful (see, Ascetic Discourses). The beauty of penitence, the beauty of tears, the beauty of contrition! … God always forgives: let us never forget this.. The problem is in us, that we tire of asking for forgiveness, we become wrapped up in ourselves and we do not ask for forgiveness. This is the problem; but He is there to forgive.

If we always keep in mind that God “does not deal with us according to our sins, nor repay us according to our iniquities” (Psalm103: 10), we live in mercy and in compassion, and love appears in us. May the Lord grant us to love in abundance, to love with a smile, with closeness, with service and also with grief.

Read more:
Pope Francis: One of the evils of our day is the loss of a sense of sin