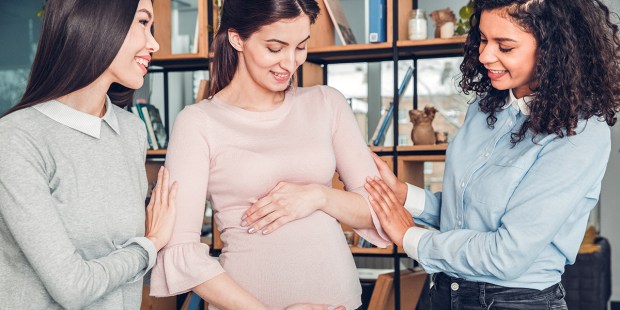 People say the darnedest things … but here’s how to counter those interactions with positivity, humor, and forgiveness.

Pregnancy is an amazing occurrence. From conception to birth, much of a woman’s body is working toward one thing — growing the human life inside of her. But somehow, once a woman becomes pregnant, polite conversation and boundaries fly out the window. Complete strangers will say and do things that would be unacceptable in other situations. How can we respond to these uncomfortable interactions?

If you’re anything like me, it’s very hard to react the way you would like to in the moment. So here are a few of the most common things that pregnant women deal with on a regular basis and some ways you can handle them…

1
Stories from the delivery room

Every woman who’s given birth has a labor and delivery story and for some reason, as soon as the topic of birth comes up, women feel the need to share every grisly detail of their child(ren)’s birth.  It doesn’t matter if the expectant mother is a first timer or not, the labor and delivery details, in all their glory, will flow forth without restraint.

Childbirth is daunting enough without having to hear about everything that could possibly go wrong. Usually there will be a warning of some sort before someone dives headfirst into a story about their nightmare delivery. Be straightforward and say, “Can you save it for later?” or, “Can we share stories after I go through mine?” Most people will read between the lines and respect your wishes.

2
Touching you without permission

Once a woman begins to show, everyone wants to touch that belly! They all seem to forget that, betwixt their hand and the beautiful baby is someone else. Back pats, belly rubs, and hugs are some examples of the unwanted touch that expectant moms feel the need to put up with regularly.

Pregnancy doesn’t render you invisible. It does not make your body and your boundaries matter any less than they did before becoming pregnant. Sometimes a person will ask to touch your belly. If you do not want to be touched, say no. If a person doesn’t ask permission and attempts to touch you, step out of their reach. If that person doesn’t get the hint, let them know that you do not want to be touched.

You do not need to accept unwanted touch when you’re not pregnant and you’re under no obligation to do so now that you are. Pregnancy doesn’t give others the right to invade your space and touch your body without permission.

3
Comments on your shape or size

Everyone is created unique and beautiful. Pregnancy is a process and our beautiful, unique bodies go through it differently.  No matter how a woman’s body responds to pregnancy, someone will have something to say about her weight gain, lack of weight gain, size, shape, how she’s carrying the baby, where she’s carrying it, and so on.

If the comment equates to a social faux pas in any other circumstance, it should be considered the same when said to a pregnant woman. Personally, I don’t want people commenting on my weight and I’d prefer they not mention it in casual conversation. When someone comments on my pregnant body I play dumb. I ask them what they mean. I’ll have them explain it and then just shake my head, smile, and move on. Doing this person by person may seem tedious but they will be much less likely to make that comment to you, or anyone else, again.

No matter what decisions a woman makes during her pregnancy, there will be someone who thinks they know better. If you choose to cut out caffeine, there will be someone trying to dissuade you with a bit of anecdotal evidence. I was once told that if I lifted my hands above my head, my baby would be born deaf. Does that make sense? No. Is it helpful in any way? Also, no.

Usually, a mother makes educated decisions regarding what’s best for herself and her baby based on what she has learned and wisdom that has come from people she loves and trusts. But it can help to be reminded: Someone else’s opinion shouldn’t dissuade you from doing what you think is best.

There are several easy ways to respond to unsolicited advice. You can say “thanks for your input but I have my own reasons for doing it my way,” or “I’ve already made my decision, thanks,” or even “I’m all set”. You don’t need to explain your choices and you don’t need to give merit to their words unless you want to.

5
Comments on your family size

I have three living children so I’d say our family is pretty average sized. Even so, I’ve been told to stop having children more than once. Strangers have weighed in on when, or if, I should have my next child. Once, when we were out grocery shopping, another shopper looked at my two children then pointedly stared at my stomach while exclaiming, “She’s a glutton for punishment!”

To all of these comments, I just smile and move on. Are they annoying and unnecessary? Absolutely. If you want to have some facts to fire back about the overpopulation myth, I’d recommend reading, What to Expect When No One’s Expecting by Jonathan V. Last.

At the end of the day, it is up to you which comments you choose to accept or reject. But don’t be afraid to speak up to correct or deflect others’ bad manners. Most people don’t mean to be rude, but they’ll never change if they aren’t challenged to think twice about their actions and words. And the sooner we forgive hurtful or unnecessary comments, the sooner we will regain our own peace and focus on the beautiful aspects of pregnancy.

Read more:
How to deal with minor discomforts during pregnancy

Read more:
9 Saints to turn to in the months of your pregnancy