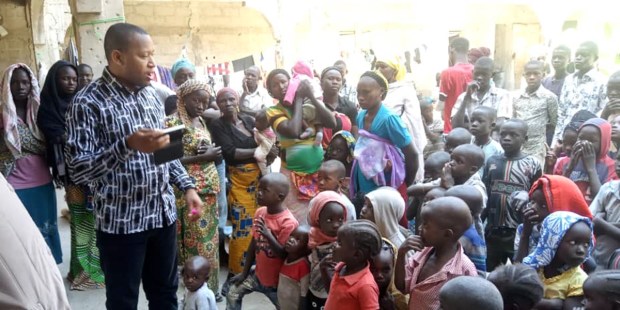 A family hiding under beds and behind curtains watched as their father was tortured and shot to death. From their village in the Nigerian state of Adamawa, they fled the terrorists, members of a group that has been responsible for attacking Christian communities. While escaping, the son was shot in the elbow and hand. He, his mother and two sisters hid out for four days, scrounging for food and water.

Finally, they reached a camp for internally displaced persons in Nigeria, and it was there that Fr. Joseph Bature Fidelis met them. The mother of the family fell ill along the way and died, and the son, 23, needed an amputation because his untreated hand had become infected.

Fr. Bature, a priest of the Diocese of Maiduguri in northeastern Nigeria for almost 12 years, oversees trauma counseling for terror survivors and witnesses. Maiduguri is the diocese in the area hit hardest by the Islamic jihadist group Boko Haram.

The diocese helped the children of this family attend school and is providing food and relief material. As for so many others, it is also providing psychological counseling.

“They’ve lost parents; they’ve received difficult wounds. There are a lot of dramatic stories and a lot of frustrating issues,” he said in an interview Thursday. “One of the girls has problems sleeping. That tells you things about flashbacks and a lot of traumatic stress disorder. I am accompanying this family in therapy.”

The United Nations refugee agency (UNHCR) estimates that there are more than 2 million IDPs in Nigeria.  A longstanding problem of persecution of Christians in this part of the country got worse with the rise of Boko Haram in 2009. “Christians are targeted, their places of worship, churches are burned, Christians are kidnapped and killed,” Fr. Bature said. “Since December, the intensity of attacks has become very ferocious, because the pattern of attack changed to that of separating Christians and Muslims on the highways and killing the Christians.”

And groups like Boko Haram do not discriminate among denominations, he said. While there have been kidnapping of Catholic priests and seminarians, and even one young seminarian being killed, terrorists have often attacked non-Catholic Christians. Recently, an evangelical pastor, Rev. Lawan Andimi, chairman of the Christian Association of Nigeria’s chapter in the Michika Local Government Area of Adamawa state, was taken from his home and hacked to death.

In the face of the worsening situation, the Catholic Bishops Conference of Nigeria wrote a letter calling for all Catholics on Ash Wednesday to fast, pray and demonstrate against the lack of security. All bishops of Nigeria on March 1 led a peaceful demonstration on the streets of Abuja, after which the president of the bishops’ conference issued a press release denouncing the killing of Christians.

“The bishops have asked the government to step up and protect everybody in Nigeria, especially Christians, who have been targeted,” said Fr. Bature, who is also director of the Maiduguri Diocese’s Justice, Development and Peace Commission.

So far, the government has not taken sufficient actions toward that end.

In an interview with Catholic News Agency, he said that many of the people he treats for post-traumatic stress disorder “believe that they are no longer normal,” with some believing that they are possessed.

“I am trying to help those who are victims of these attacks,” Fr. Bature told Aleteia. “I go into camps to supply them psychosocial help. We provide individual and group therapies. They live in makeshift camps.” In general, his team of six professionals and several volunteers strives to “give them back a sense of dignity and stability in what they do.”

Christians and Muslims alike are suffering, he added. “We are calling on our government, which has the responsibility of defending these poor people, to guarantee their right of freedom of religion.”