May the Lord, good and merciful, grant the concerted prayer of His children who, with trustful hope, turn to His omnipotence.

I reiterate to all my invitation to participate spiritually, through the media, in the moment of prayer at which I will preside the day after tomorrow, Friday, at 6 p.m., in front of Saint Peter’s Basilica. The Word of God and the adoration of the Blessed Sacrament will be followed by my Urbi et Orbi blessing, associated with the plenary indulgence.

Pope Francis reiterated his call to join him in prayer on Friday, March 27, saying that a special urbi et orbi blessing will be given.

The hour-long service was moving, with the dramatic emptiness of St. Peter’s Square and Basilica adding to the solemnity.

Never in history has a similar ceremony occurred, with the graces of the extraordinary “urbi et orbi” blessing being received almost entirely by people tuned in through the live broadcast.

In the slideshow below, see 12 of the moving images of the Holy Father, and six of the most striking portions of his homily. 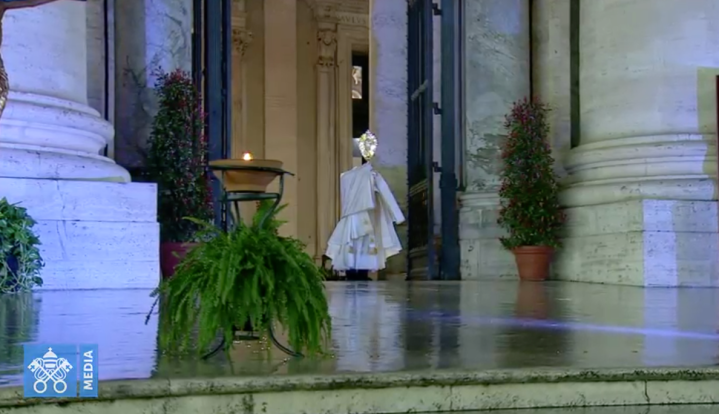