India: Suffering and consolation in a time of COVID-19 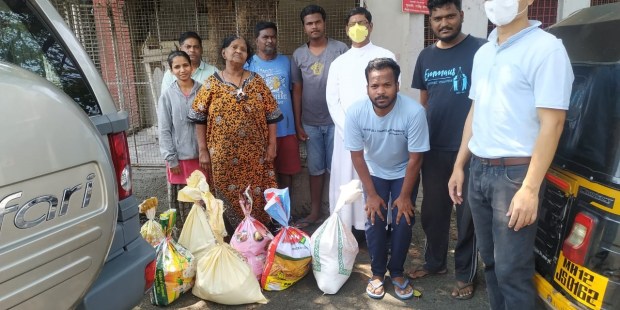 The total shutdown of the country has brought great hardship. Small Christian communities, however, are providing food, masks, and spiritual support.

India is currently under a total lockdown as a result of COVID-19. Millions of low-paid migrant workers have suddenly found themselves unemployed as a result of the total shutdown of the country for a period of 21 days, following the announcement by the Indian government on Wednesday March 25. It is a measure that has prompted a mass exodus from the cities on a scale never seen before.

An Indian nun, Sister Christin Joseph of the Sisters of Charity of the Holy Cross (SCSC), spoke to the international Catholic pastoral charity and pontifical foundation ACN, describing the situation. “There is an endless stream of tens of thousands of people trying to return on foot to their home villages, some of which are over 1000 km away, carrying their children and their belongings with them. All transport has been stopped, except for essential services, as the authorities struggle to contain the virus, which has already infected over 1000 people.”

According to Sister Christin, the situation is being made still worse by the exceptionally high temperatures of 39 to 40°C and because the people are obliged to walk, with little in the way of money or food, while at the same time all the eating places and guesthouses are closed.

In India the lack of work, particularly in the poorest states of the North such as Jharkhand, Odisha, Bengal, Bihar and Uttar Pradesh, has forced thousands of people to emigrate to the major cities of the southern states, which are wealthier and have more opportunities for employment.

“Thousands of them are simple day labourers, living in cramped apartments, working long hours for a few dollars a day in conditions that are often unsafe and without any social security network. What little is left over in the way of money after covering their basic expenses, they try to save for their families. Now because of the lockdown, they want to go back,” Sister Christin explains.

Sister Christin helps to run some of the Small Christian Communities (SCC), the small groups of Christians formed in places where the priests can rarely get and who gather together with a catechist to pray and celebrate Liturgies of the Word instead. There are something like 85,000 of these small Christian communities scattered across the whole of India. Indian Catholics very often belong to the lowest classes of society and are today facing a situation of increasingly violent discrimination. In normal circumstances Sister Christin would be travelling thousands of kilometres to instruct and encourage them.

But with the arrival of COVID-19 the situation has changed completely. Her voice suddenly trembling, she speaks to ACN: “I am over 65 years old and my health is delicate, so they won’t let me go out to do anything. Having to stay inside, under a total lockdown, and listen to what is happening to our poor people, I feel as though I am staying beneath the Cross, helpless and unable to reach and help others. This is extremely painful to me. I can do nothing but gaze with anguish at the Cross and entrust everything to the Lord, who understands better than anyone our human suffering.”

The SCCs coming to the aid of their needy neighbours

Her voice changes completely when she starts to speak about the SCCs, the small Christian communities.

“What consoles me is the fact that many of our small Christian communities are responding to this situation with thousands of simple initiatives. While still adhering to the measures imposed, for example in Bangalore, Chandigarh, Calcutta and Poona, they are seeking out those in need and giving them food. They are helping everyone – Catholics, Protestants, Hindus, Muslims – without any discrimination whatsoever.

Many of these simple initiatives would not be possible however “without the support of the police and the government,” Sister Christin acknowledges. In Sikkim Sikkim, the local SCC is helping “with the distribution of disinfectant and cleansers and face masks in the rural areas, together with members of the state government work group.”

The SCCs are also informing people about the virus and the protective measures they need to take, and in addition to this, “they are constantly supporting each other via Whatsapp and text messages with advice and suggestions for prayers, especially for the situation of the pandemic and its consequences. We have to adapt to this new way of being Church, of how to be love in action during the lockdown,” says this Indian religious, speaking principally about the work of the SCC in Jharkhand in the northeast of the country, the home region of many of the tribal communities.

Another example of this love is the initiative of one of the leaders of the community in Calcutta who is praying the Way of the Cross from his home over a loudspeaker, so that the other Christian families in the neighbourhood can join in from their own homes.

In Delhi the restrictions imposed by the government are extremely strict. Emmanuel Johnson, a leader of the local SCC in the Indian capital, explains that it is not easy to even move about, but that they are helping to distribute food rations to the day labourers and other needy families.

“Additionally, we have started up a Family Prayer initiative for the next 21 days, at 7 pm promptly every evening, when we gather in our own homes with the members of our family and pray the Rosary in solidarity with those infected by the virus. Since the laity can now no longer participate in Holy Mass, we have begun a daily reading of a prayer of Spiritual Communion, which many of our people did not know before.”

“I for my part am trying to encourage and motivate them by means of constant messaging via Whatsapp, text messages and emails,” says Sister Christin, though not without first expressing her gratitude for those who have helped make possible these Small Christian communities which are now such a source of consolation for thousands of people in India currently suffering from the consequences of the epidemic. “I am extremely grateful to ACN for the help they have given us over so many years in supporting and sustaining our basic Christian communities. I’m quite sure that the benefactors of ACN could never have imagined that their help would now be such a source of consolation during the coronavirus crisis. But the tragedy is a grave one. India needs your prayers. Please don’t forget us! And may God bless you all!”