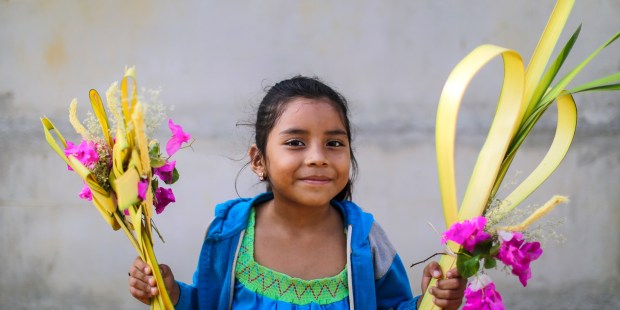 Cardinal Dolan offers a small alternative to the flock of New York, hard-hit by COVID-19.

Facebook has parents chuckling with a meme encouraging them to find alternative sharp objects for children who this year won’t be able to tease and tickle each other and those of neighboring pews with their palm branches.

But joking aside, the fact is that the faithful are missing this annual custom, taken from the Gospels, of receiving palm branches in church for the Sunday that starts off Holy Week.

The very large crowd spread their cloaks on the road,
while others cut branches from the trees
and strewed them on the road.

The crowds preceding him and those following
kept crying out and saying:
“Hosanna to the Son of David;
blessed is the he who comes in the name of the Lord;
hosanna in the highest.”

In addition to the procession that begins Palm Sunday Mass, the palms are kept and braided by many families, as a sacramental to hang on the walls or tuck into doorposts, until they are burnt for the ashes of the following year’s Ash Wednesday.

This year, of course, there will be no palms.

Cardinal Timothy Dolan, in a message to hard-hit New York, acknowledges the disappointment of his flock:

One question that has come up repeatedly among many of the priests and Monsignor Joseph LaMorte, our Vicar General, is how to handle the distribution of palm this Sunday.

We had hoped to find a way to distribute the palm, and many good suggestions were offered, but, ultimately, our medical experts told us the threat of possibly spreading the virus seemed too great. Therefore, we have asked the pastors to bless, then store, the palm until such time as we are able to once again open our churches.

While it’s no substitute, Cardinal Dolan did offer the faithful of New York a small alternative:

We have developed the attached image, should you wish to print or download it, that might serve as “virtual palm” until we can share the real thing.

People of many cities across the world are using their balconies as a place to share their faith, particularly as we get ready for the most solemn week of the year. An image of palm branches hung from a balcony might be a good idea in this vein.

And we shouldn’t underestimate the power of evangelization in this small way. As one city dweller asked on a Facebook page: “What is all this religious imagery about?” A faithful Catholic was able to respond that hanging religious images is a way to spread hope while our churches are closed. How long had it been since that city dweller had seen a religious image? Perhaps he never had.

Also, don’t forget that before our modern times, the faithful who didn’t live in areas like Jerusalem, where palm-type branches are available, substituted with local plants. So pick whatever green branch you have in the yard, or print off an image such as Cardinal Dolan’s. And thus we will begin the holiest week of the year.