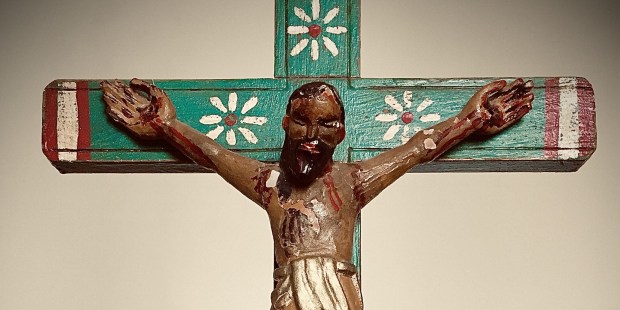 Of all the Catholics of the Americas, it is the Americans of Mexico who have given us some of the most striking images in the history of Christian art.

Around 500 years ago this week, the first major American Easter Mass was celebrated. In what is now Mexico City, it was attended by emissaries of the Aztec ruler, Moctezuma II.
Since the 1960s the Roman Catholic Church has promoted the idea of one continent — “the Americas.” Of all the Catholics of the Americas, it is the Americans of Mexico who have given us some of the most striking images in the history of Christian art. The best known of all is the ubiquitous Our Lady of Guadalupe. Also deserving attention are folk-art crucifixes with their special blend of gore and cheerful floral motifs.
This is a simple example from the early 20th century, replete with the raw vigor of so-called “New World” iconography. Sadly, it’s Mexican Day of the Dead paraphernalia that gets the most attention around the world, including from the producers of James Bond films.
Lucien de Guise is on Instagram @crossxcultural. As a Catholic writer, editor, curator and former museum director, his aim is to build bridges through art.