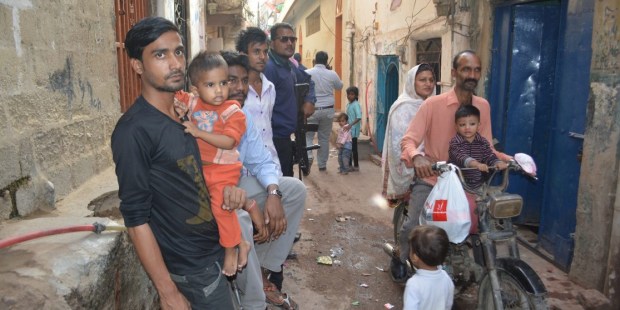 There have been reports of COVID-19 emergency aid staff on the ground refusing to give help to non-Muslims as the donations had come as Zakat charitable offerings, in accordance with Islamic Shari‘a law.

NGOs and Muslim leaders in Pakistan stand accused of refusing to give COVID-19 emergency aid to Christians and other religious minorities – even though they are among those worst affected by the pandemic.

Cecil Shane Chaudhry, Executive Director of the National Commission for Justice and Peace, a Catholic-run human rights organization, described reports of religious organizations and mosques making announcements telling Christians not to come forward for food and other emergency handouts.

Speaking to the Catholic charity Aid to the Church in Need, Chaudhry said Christians and other religious minorities were particularly in need of help as many are in the lowest paid jobs, dependent on daily wages, and on the breadline, with work drying up because of the lockdown.

And, stressing how minority women were especially at risk, he called on the Pakistan government to provide masks, gloves and other COVID-19 protective equipment for sanitary workers and domestic workers – many of whom are Christians.

With Pakistan’s government now easing the lockdown, Chaudhry said he feared a spike in COVID-19 cases especially among Christians and other minorities whose jobs, he said, make them particularly at risk of infection.

Chaudhry gave reports of how Christians in a village near Lahore on Raiwind Road had been denied food aid and how, in a separate incident, about 100 Christian families were excluded from food distribution in Sandha Kalan village, in the Punjab’s Kasur district.

He said there were reports of COVID-19 emergency aid staff on the ground refusing to give help to non-Muslims as the donations had come as Zakat charitable offerings, in accordance with Islamic Shari‘a law.

Chaudhry said, “COVID-19 knows no boundaries – everyone is at risk, irrespective of their religion so how can it be fair to deny food and other emergency help to Christians and other minorities, especially when they are among those suffering the most at this time?”

The NCJP chief quoted an imam from a mosque in Lahore’s Model Town who, he said, had announced in a recent sermon: “There will be a ration distribution tomorrow morning for needy people but only for Muslims.”

Pakistan has 32,819 confirmed cases of Coronavirus, according to latest reports, with 733 deaths, although Mr Chaudhry stressed many cases were going unreported.

The NCJP chief called on the government to consult with minority groups about COVID-19 response initiatives and to make better use of census data to target aid for the most vulnerable.

He said, “Although plans are being worked on, for now we do not know of [any initiatives to include] religious minority members to ensure their needs are not ignored.”

In early April 2020, ACN reported on claims that the Saylani Welfare International Trust, a charity in Karachi, had been handing out food vouchers in the port city’s Korongi district but when they got to Christian homes they moved on.

This article was published with the kind permission of Aid to the Church in Need UK.