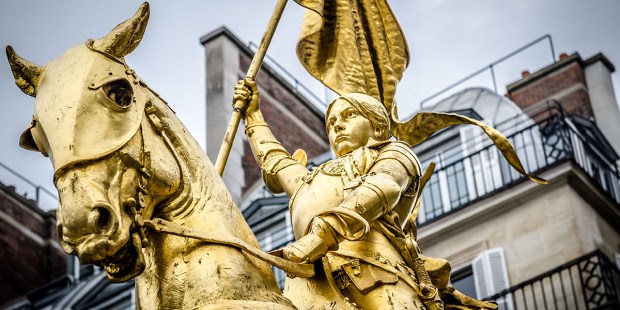 The French Knights of Columbus will place the intentions at the same Marian shrine St. Joan of Arc prayed at before leaving to participate in the Hundred Years’ War.

The Knights of Columbus in France are commemorating the 100th anniversary of St. Joan of Arc’s canonization by bringing prayers from around the world to their country’s patron saint.

Knights from the saint’s hometown — Domrémy — are collecting prayer intentions and leaving them at the foot of the statue of Our Lady of Beaumont, the same statue St. Joan of Arc prayerfully visited before leaving her village to fight in the Hundred Years’ War. The statue is currently located in the Basilica of Bois-Chênu in Domrémy, which was dedicated to the French patron saint in the late 19th century.

“This time of confinement is a time of pain and grace,” said Arnaud Boutheon, the Knights of Columbus’ special consultant for French affairs. “We believe in the communion of saints, we believe in the power of prayer, and we know that the Blessed Virgin of Beaumont, who welcomed the prayers of little Jeanne, will know how to intercede for us with Jesus, to entrust to him our family of the Knights of Columbus and our countries.”

St. Joan of Arc was a shepherdess in medieval France who began hearing the voices of St. Michael the Archangel, St. Catherine of Alexandria and St. Margaret of Antioch. As a teenager, she felt called by God to help her country that was at war with England. After leading an army in support of the French king, she was condemned to death for heresy by corrupt judges and burned at the stake May 30, 1431, at age 19.

She has since become a symbol of French nationalism, a popular subject in literature and film, but, most importantly, a powerful witness of Christ. For that, Joan of Arc was canonized by Pope Benedict XV on May 16, 1920 —nearly 500 years after she was martyred.

Boutheon believes her vocation, her patriotic duty to serve God and her country, is “universal.”

“Saint Joan of Arc gathers in her person many contemporary chivalric virtues such as boldness, charity and freedom of conscience, in the face of cowardice, predation and submission,” Boutheon said. “Through her Fiat, she was able to restore confidence, dignity and hope to men. Her word is a free word, touched by the grace, in the face of pressure from clerics, doctors and scholars.”

Patriotism is a core principle of the Knights of Columbus. During the current COVID-19 pandemic, now more than ever, the French Knights look to St. Joan of Arc’s example of service to both country and Church.

“The principle of patriotism invites us to serve our love and to place our steps in those of the saints who bequeathed the Catholic faith to us,” Boutheon said.

During the pandemic, the French Knights have helped food pantries, broadcast Masses and even served as ministers to bring the Eucharist to the sick and isolated in an effort to leave no neighbor behind.

They also co-produced a video (along with Aleteia) with testimonies about how St. Joan of Arc played a role in their lives, which was broadcast on May 1.

For Boutheon and the Knights, the event Saturday is about humbly serving their countrymen and fostering a spirit of prayer for all facing these unprecedented circumstances. And what better way than to ask for the intercession of St. Joan of Arc?

If you want prayers left at the foot of Our Lady of Beaumont, please send them to 100anssaintejeannedarc@gmail.com.

Andrew Fowler is a Content Producer with the Knights of Columbus. Send comments and stories to andrew.fowler@kofc.org