A look at La Conquistadora, the oldest Marian statue in America

Our Lady of Conquering Love has a wardrobe fit for a queen.

In Santa Fe, New Mexico, residing within the storied 133-year-old walls of the Cathedral Basilica of St. Francis of Assisi, there stands the oldest Marian statue in America. Known as La Conquistadora, or Our Lady of Conquering Love, this image of the Blessed Mother has been the community’s centerpiece for nearly 300 years longer than New Mexico has been a state.

According to the history of La Conquistadora, extensively recorded on Wikipedia, the 30-inch statue was brought to Santa Fe by Fr. Fray Alonso de Benavidesto, in 1626, although it is unknown how long it was in the New World prior to this record. Dendrochronological studies of the wood used to create the artwork date it to the Renaissance, between the 15th and 17th centuries. While this dating is generally accepted, the presence of two different kinds of wood, willow and European olive wood, has puzzled experts.

For hundreds of years, La Conquistadora has drawn devotion from the faithful, who have taken to honoring the Blessed Mother with donations of small dresses and elaborate jewelry. During the last four centuries, this tradition has built up an elaborate wardrobe, including more than 300 ornate dresses and adornments studded with precious gemstones. A report from Atlas Obscura places the value of the 14-carat gold crown, used for her papal coronation in 1960, at $65,000, while another prize piece of her collection is a Byzantine cross of 220 diamonds, sapphires, and emeralds.

Atlas Obscura also notes that the statue has a collection of wigs, which are made of human hair and nearly all dark brown. Several of the wigs are made from hair donated by cancer patients. The statue is sometimes posed with a smaller wooden figure of the infant Jesus, which has been determined to have been created separately from La Conquistadora.

The historic statue also has a body double, named La Peregrina, which is used as a stand-in when La Conquistadora is removed for from the chapel for sepcial appearances at events.

Since 1685, La Conquistadora has been cared for by the Cofradia del Rosario, a confraternity which promotes and pays the expenses of the Marian statue. According to the Cathedral Basilica website, they are the custodians of the statue and all its belongings and they cover everything from maintenance to changing the Blessed Mother’s attire, which happens about once per month.

Membership in the Cofradia del Rosario is open to anyone who wishes to share in their devotion to the Virgin Mary. Interested parties can find more information here. Also available on the Cathedral Basilica website is a virtual tour of the grounds, which takes viewers up close to the transept where La Conquistadora is housed. Just click your way up the aisle to the altar and then turn left to explore the statue’s ornate alcove. 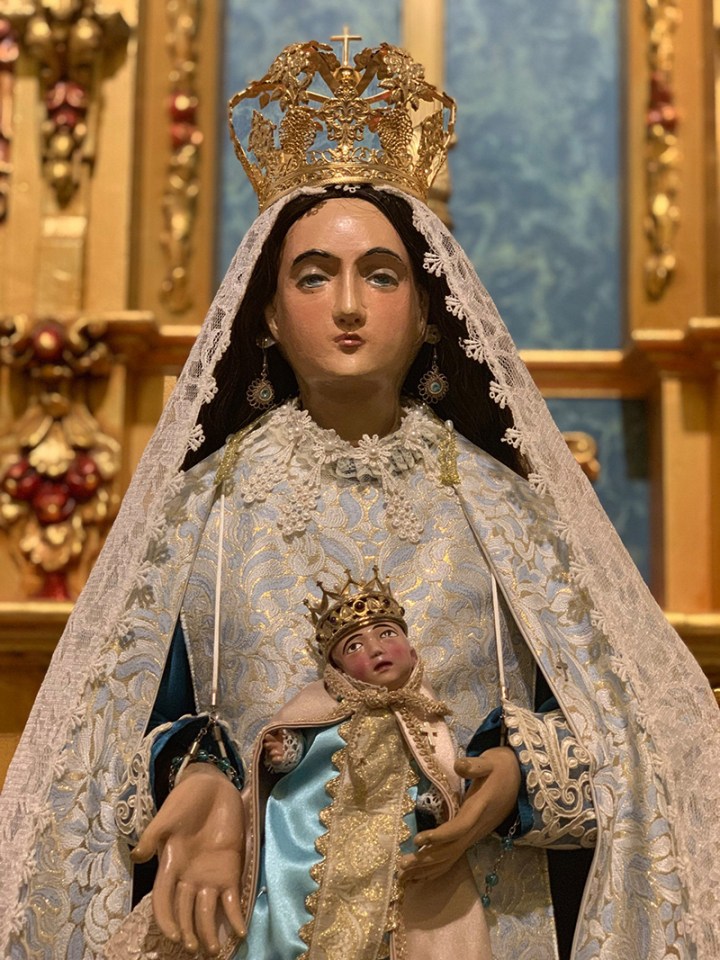