Archaeological site was closed for a decade of renovations and months of pandemic.

In eastern Jerusalem, just half a mile north of the Old City, the Tombs of the Kings have stood for nearly two millennia. The site was closed for over a decade while a preservation effort conducted renovations — costing over $1.1 million — and it was initially re-opened in the summer of 2019, however, the world pandemic caused all tourist sites to close. Now, as many governments are working to end the period of social distancing, the site is reopening once more.

According to Krystal Pierce of The Biblical Archaeology Society (BAS), while its name suggests that this was a burial site reserved for kings, excavation has since proven that there are no monarchs interred in its crypts. The misnomer came about from the assumption that the grandeur of the tombs could only be meant for the highest level of royalty and, for much of this tomb’s history, it had been suspected to be the burial place of the kings of Judah.

While the likes of King David and King Solomon were not found in the Tombs of Kings, a 19th-century excavation conducted by French archaeologist Louis Félicien de Saulcy discovered several sarcophagi, one with a pair of Aramaic inscriptions that Pierce reports read, “Tsadan the Queen” and “Tsadah the Queen.” This sarcophagus, believed to have been that of Queen Helena of Adiabene, now resides within the Louvre Museum, in Paris.

The site has been a popular tourist and pilgrim destination for hundreds of years. Today, much of the site is cordoned off from the public, but some sights are still viewable, including cisterns, which are still full of naturally accumulated water. The monumental stone facade — carved into the rock– stands over a massive 30-foot-wide staircase leading to the entrance of the tombs, where the rolling stone door-cap still rests.

There are two levels of the tomb, with three rooms on the lower floor and four rooms on the upper floor within the structure. Aside from an antechamber, each room was built with six niches in the walls, where remains could be interred.

Records from Wikipedia explain that the site was purchased by a French national after its excavation, and it was eventually donated to the French government, which still holds custodial rights to the tombs. It is for this reason that the gate around the tomb is adorned with “Republique Française Tombeau des Rois.” The ownership rights of the Tombs of the Kings have created a legal dispute, with local Jewish leaders wishing to see the site returned to their control. 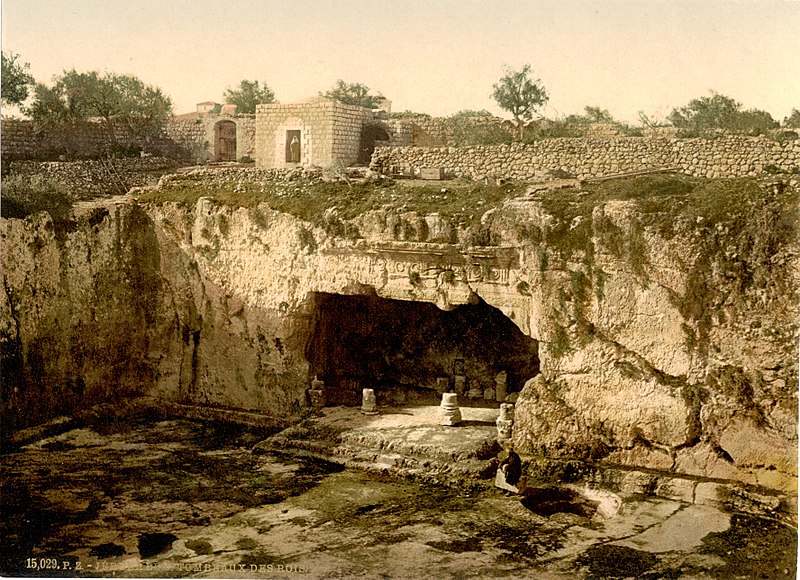