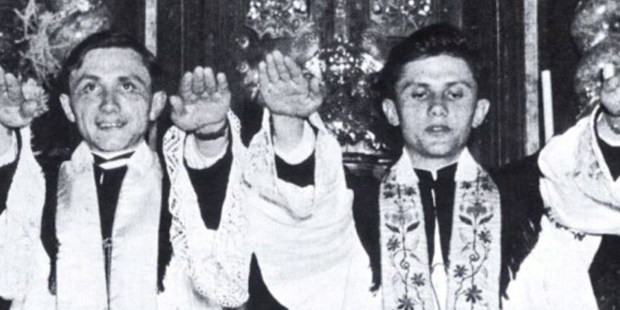 Pope Emeritus Benedict XVI has traveled to Germany to be with his 96-year-old brother, Georg.

The pope emeritus, himself 93, will spend the “necessary time,” with his brother, the director of the Vatican press office told Zenit. He went with his secretary, Archbishop Georg Gaenswein, a doctor, a nurse, one of the nuns who provides upkeep in the Vatican monastery where he usually stays, and the deputy commander of the Gendarmerie Corps of the Vatican City State.

In a statement June 18, Bishop Georg Bätzing, president of the German bishops’ conference, welcomed the pope emeritus “with great joy,” though recognizing that the return to his homeland is for a sad occasion. “The pope emeritus wants to be close to his brother, Protonotary Apostolic Dr. Georg Ratzinger, whose health has deteriorated.”

“From the bottom of my heart I wish Pope Emeritus Benedict XVI a good stay in Germany and the necessary rest to look after his brother privately. My prayers will accompany his stay and the journey of his brother Georg.”

Joseph and Georg Ratzinger were ordained priests together on June 29, 1951.

Read more:
Bishop Barron on ‘The Two Popes’ movie: The One Pope

A statement from the Diocese of Regensburg said the retired pope had arrived by plane Thursday “to be at the side of his seriously ill 96-year-old brother. It is perhaps the last time that the two brothers, Georg and Joseph Ratzinger, will see each other in this world.”

It added that Benedict XVI “made the decision to travel to his brother in Regensburg at short notice, after consulting with Pope Francis.”