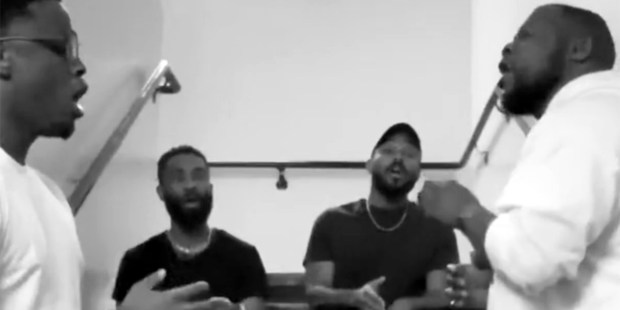 The video sends a timeless message: Where charity and love are, God is there.

Kings Return, an a cappella vocal group rooted in Gospel, jazz, R&B and classical music, recently wowed their fans with a rendition of the classical Latin piece Ubi caritas. Sung from the heart of an ordinary stairwell, the choral acoustic perfection has gotten a lot of praise — over 14,000 shares and streams of comments, with listeners expressing their heartfelt gratitude: “That brought tears to my eyes …” “Positively breath-taking …” “Heavenly.”
The 8th-century antiphon, often sung on Holy Thursday during the washing of feet, was arranged by the modern Norwegian composer Ola Gjeilo. Translated, the piece sends a powerful, timeless message: Where charity and love are, God is there. Christ’s love has gathered us into one. Let us rejoice and be pleased in Him. Let us fear, and let us love the living God. And may we love each other with a sincere heart.
As of the song’s release on July 3, the Kings Return Facebook page had more than 29,000 followers. They describe themselves as “a vocal band of brothers formed in 2016 from pre-existing friendships.” They further explain that their band’s name “reminds us to be our brother’s keeper and to pay homage to our King, Jesus, who has Himself promised to return.”