Group of pilgrims trapped together in Spain become like family 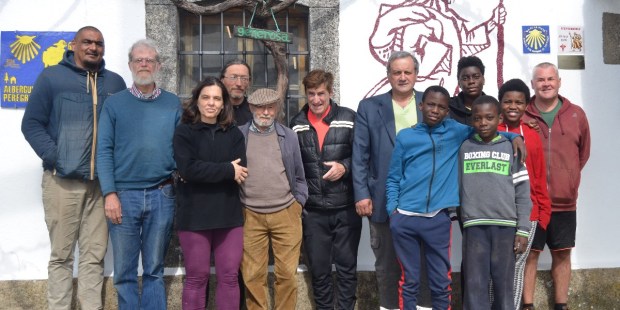 After the pandemic brought them together unexpectedly along the Camino, this group of strangers has forged lifelong bonds.

Eduardo travelled from Italy to Spain to fulfill a once-in-a-lifetime goal of hiking the Camino de Santiago, often called “the Way.” He didn’t choose the easiest route; he wanted to be one of the pilgrims who walk more than 600 miles from Seville in southern Spain to the famed spiritual destination of Santiago de Compostela in the north. Of course, he never have imagined that a global pandemic would change his plans completely.

This Italian pilgrim, like several pilgrims from other countries, had reached almost the halfway point when Spain decreed a state of alert on March 14 due to the coronavirus pandemic. Coming from Italy, Great Britain, Germany and Holland, they were in the Spanish town of Fuenterroble de Salvatierra, very close to Salamanca. Although it was hard for them to believe, they found themselves trapped in the middle of nowhere, hundreds—or thousands—of miles from their homes.

In the midst of the confusion, they were trying to figure out how to return to their countries, while in their pilgrims’ backpacks they had only the basic belongings for living away from home: just some clothing and not much else.

Trapped by a global pandemic

Of course, God didn’t abandon these pilgrims. He arranged for them to meet Fr. Blas Rodriguez, a priest who runs a parish hostel called Santa Maria. The hostel welcomes pilgrims on the Camino de Santiago all year round.

This is how, in the middle of the most serious health crisis of recent times, this picturesque image came together in Fuenterroble de Salvatierra: people from all corners of the world, gathered thanks to the hospitality of this parish priest. Fr. Blas told news outlet COPE,

“This is a little Pentecost: speaking in different languages, we all understand each other because what matters is good will and the desire for everyone to do the best they can, a disposition they have at all times.”

This peculiar group spent more than seventy days confined together. Fr. Blas was confident that it’s only been a “stop on the way due to the coronavirus.” They took it in stride with hope in the midst of so much negative news around the world.

Read more:
What happened when two best friends walked the Camino with a wheelchair

While the pilgrims were still there, Fr. Blas said that they did very well “because everyone carries out the tasks they like best. One man is a carpenter, so he’s doing carpentry; another is a plumber, so he’s helping with plumbing.” He added,

“We each have our own story, and as the days start to weigh on us, people’s hobbies are also coming to the surface… Good will conquers all and Providence is taking care of us, thanks to Caritas and the Red Cross we’ve been able to survive.”

Together, they undertook several projects, such as making birdhouses and beehives to hang along the Camino when those who wanted to continue, instead of head directly home, were allowed to embark again on their journey. They’re also helping to prepare horse-drawn carriages for a traditional procession, and within the hostel, are decorating different areas to represent different countries around the world.

Neighbors from the town and other individuals joined in Fr. Blas’ hospitality, and came forward to help in any way they could. Some donated locally-made sausages, which Fr. Blas says are “the best in the whole world.” He says that his guests were “very comfortable” and that the only problem was the inability to leave.

With the quarantine in Spain coming to and end and the beginning of an apparent “new normal,” the stranded pilgrims have continued on the Camino or returned home. One pilgrim from Italy, named Mario, said in a radio interview that he has enjoyed his stay in Spain during the confinement so much that he plans on staying in the country and seeking employment after finishing the Way. He also plans on continuing to help Fr. Blas—with whom he has forged a strong friendship—with his many projects.

Fr. Blas explains that after so many days, “bonds of friendship have been created that will be difficult to break. Neither time nor distance will be able to make them forget.”

Read more:
You can now hike the Camino de Santiago from anywhere in the world