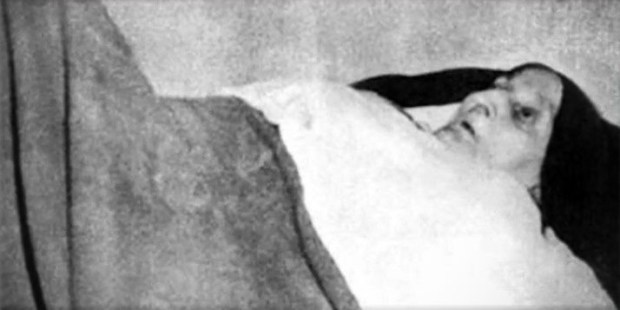 Some thought her possessed by a demon, but St. Bruno took her into his care. She died in 1953.

Mariantonia Sama was born on March 2, 1875, in the Catanzaro, located in the southeastern section of Italy. Her father died a few months before her birth, and her mom was on her own in caring for her new baby. She was quite poor, and she and her child lived in a tiny home located on a street that was only about five feet wide. The dwellings surrounding the little house were all larger, and besides being small, their place was never exposed to pure daylight.

Mariantonia was baptized on March 3 in the local parish, and her paternal grandmother and maternal great-uncle stood in as her godparents. Mariantonia received her First Holy Communion and her Confirmation sometime during 1882.

Mariantonia and her mom became very close, as they only had each other. Mariantonia’s mom was illiterate, and so it was for her daughter. Together, using a borrowed mule, they would load wheat and take it to the mill. They would exchange it for flour, which they brought back to town. The flour was traded for bread and other food to eat.

Sometime during the year 1886, Mariantonia, her mom, and some relatives walked to the Saturo River to wash clothing. There was a mill along the riverbank, and it provided a semblance of running water to use in washing. On the way, Mariantonia, who was very thirsty, stopped at a large puddle and bent down and drank the water from it. It seemed clean, but unfortunately, it was contaminated.

When Mariantonia and her mom arrived home, the child curled up, screaming in pain. Her unexplained and frightening behavior continued for more than a month, and during this time, she would not only shake, but her body would seem to vibrate, and she would babble sounds that made no sense. People began suggesting that the girl was the victim of diabolical possession. Her behavior transformed from docile to hostile and this situation went on for eight years. Some doctors thought it neurological, others emotional, and still others, gastrointestinal. Many thought it was time to give this over to God.

In 1894, when Mariantonia was 20 years old, the Baroness Enrichetta Scoppa took it upon herself to intervene in an attempt  to help Mariantonia and her mom. She organized a trip to the Carthusian convent of San Bruno, where the monks would pray over her, and an exorcism would be conducted. Mariontonia was carried inside a box for eight hours to get to the convent.

Once inside the convent, a silver bust of St. Bruno, holding his skull and bones, was shown to Mariantonia.

Mariantonia believed that the bust of St. Bruno smiled at her. She also seemingly felt much better and was able to get up. Her recovery was attributed to the intercession of St. Bruno, the founder of the Carthusians. She was taken home and seemed better for a short time. But before long, she was once again bedridden, this time with her legs bent at the knees. For the next 57 years, she would remain in that position, crippled by arthritis. Her legs were bent as if she had been crucified.

People began coming to see Mariantonia looking for advice, to obtain grace, spirituality, and even a miracle. Baroness Scoppa had allowed the Sisters of the Sacred Heart to settle in her vacant palace, and they made Mariantonia an honorary “sister,” even covering her head with a black veil. She became known as the “Nun of San Bruno,” though she was never a nun at all. She did, however, profess private vows.

Mariantonia died on May 27, 1953. She was 78 years old. Even after she died, they could not straighten her legs, and she was buried that way. She had been holy in life, and even after her death, miracles were attributed to her. On December 18, 2017, she was declared Venerable.

A woman named Vittoria from Sant’Andrea was the miracle case validated for Mariantonia’s beatification. Between December 12 and 13 in 2004, she was cured overnight of a degenerative osteoarthritis. She invoked Mariantonia during the night to help with the pain, and it vanished and never returned. This miracle was approved by Pope Francis on July 10, 2020. The Beatification will take place in 2021.