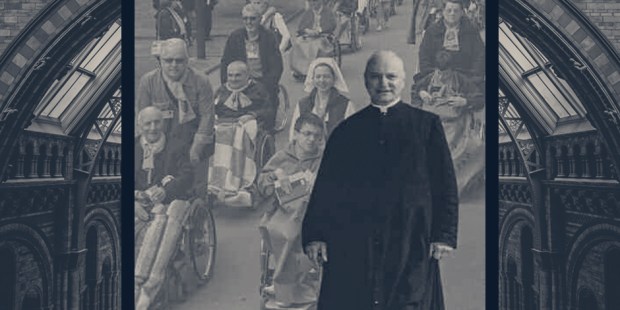 But his mom turned to the Blessed Virgin for help and he ended up working in the Vatican’s Secretariat of State.

Luigi Novarese was born on July 29, 1914, in Casale Monferrato, located in northern Italy. He was the ninth and last child born to Giust Carlo Novarese and Teresa Sassone. Luigi’s dad died before the boy’s first birthday from pneumonia. His mom, a devout Catholic, embraced her responsibility and did her best to keep the family afloat. She was somehow managing when, in 1923, Luigi was struck with a life-threatening disease. He was diagnosed with bone tuberculosis. The doctors told his mom there was no cure, and there was no hope.

But Luigi’s mom couldn’t accept that. She was determined to save her child and worked as much as she could, saving every penny possible to cure her dying son. And she had one weapon the doctors did not have: she turned to the Blessed Virgin and begged her to help in Luigi’s recovery.

Doctors told her she should resign herself to the fact that her son was terminally ill and would not live. Teresa Sassone was undeterred and kept on praying.

Luigi, following his mom’s example, developed a deep devotion to the Blessed Mother. He wrote a letter to Father Filippo Rinaldi, the head of the Salesian Order at the time, asking him to have the students pray for him. Father Rinaldi assured Luigi that they would pray for the intercession of St. John Bosco and Our Lady Help of Christians.

On May 17, 1931, Luigi Novarese left the hospital for the last time. He was 17 years old. The illness was gone, and doctors could not explain it. But the disease caused Luigi’s one leg to become shorter than the other. This required him to wear a special shoe for the rest of his life. He didn’t mind at all.

During his many hospital stays, Luigi became impressed with the work of the doctors and decided that he would become a doctor himself, if he survived. He had a change of heart when, in 1935, at the age of 21, his mom died. Luigi thought about how hard his mom prayed for his recovery and realized that he could serve the Lord by offering his suffering for those who are seriously ill. He entered the seminary at Casale Monferrato, Italy. From there, he moved and completed his studies at the Capranica College in Rome. He was  ordained a priest at St. John Lateran Basilica on December 17, 1938.

While a student, Luigi Novarese earned degrees in Theology and Canon Law. On May 1, 1942, Monsignor Giovanni Montini, the future Pope Paul VI, asked Luigi to join his staff at the Secretariat of State for the Vatican. Father Novarese would remain there until May 12, 1970.

On May 17, 1943, while on staff at the Secretariat of State, Father Luigi founded the Marian Priest League. In 1947 he would co-found the Volunteers for Suffering and, in 1950, the Silent Workers of the Cross. In 1952, he founded the Brothers and Sisters of the Sick.

Read more:
“Offering it up”: Is that still a thing?

He still had more to do, so he was able to get permission from Pope Pius XII to launch an hour broadcast on Vatican Radio dedicated to the sick. In 1962, Pope John XXIII placed Father Novarese in charge of all Italian hospitals. Then, in 1970, he was put in charge of the health sector of the Italian Episcopal Conference, where he remained until 1977. During this time, he met Pope John Paul II, and when they met, the Holy Father embraced him.

Luigi Novarese died on July 20, 1984, now his feast day. He was about to turn 70 years old. He was beatified on May 11, 2013, at the Basilica of St. Paul Outside the Walls in Rome, Italy, by Cardinal Tarcisio Bertone with the approval of Pope Francis. Blessed Luigi is the patron for the Apostolate of the Suffering, Silent Workers of the Cross, Maria Priest League, and Brothers and Sisters of the Sick.

Here’s an interesting side note: Venerable Angiolino Bonetta, the 14-year-old cancer victim featured at Aleteia on July 22, was visited by Blessed Luigi Novarese in 1962, as part of his ministry of the Apostolate of the Suffering.

Read more:
He was only 14 but he already lived “heroic virtue”: Meet Angiolino Bonetta