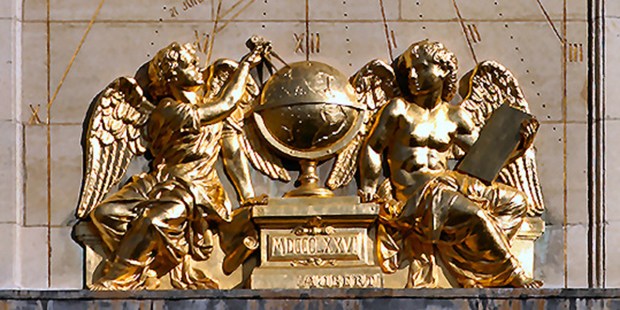 As one of the leading scientific minds of his era, Picard corresponded with other eminent scientists, including Isaac Newton.

Priests are often asked to make sense of this world. But Jean-Félix Picard, who was both a priest and an astronomer, became the first person — lay or clergy — to give humankind an accurate idea of our planet’s size.

He was born 400 years ago, on July 21, 1620, in La Flèche, France. Details of his youth are scarce. We do know, however, that his father was likely a local bookseller. Another known detail is that the younger Picard studied at the Collège Royal Henry-Le-Grand, which was at that time a Jesuit school (it later became a military school, the Prytanée National Militaire).

After graduation, Picard headed to Paris. There he became a protégé of Pierre Gassendi (who was both a priest and an astronomer) and served the role of assistant to Gassendi’s observations of lunar eclipses. Some sources relate that Picard eventually replaced Gassendi in the latter’s position as an astronomy professor at the Collège de France.

Ordained into the priesthood in 1650, Picard would serve as a priest and prior in the former province of Anjou (western France). He also continued with his scientific pursuits, and eventually acquired a solid enough reputation to receive induction into the French Academy of Sciences, just one year after its 1666 formation.

However, Picard’s major achievement did not come until after his induction, when the Academy assigned him to measure the length of one degree of latitude (extending from Paris to Sourdon, near the city of Amiens).

With painstaking attention to detail, Picard spent two years on this assignment. Using the mathematical methods of triangulation and specially-designed tools equipped with micrometer screws, he eventually arrived at the result that one degree of latitude was equivalent to 68.64 miles (110.46 km). This number would mean that the earth’s polar radius is about 3,932 miles (6,328 km), which is less than one-half of 1 percent removed from the updated current-day number of 3,950 miles (6,356 km).

Upon ascertaining the radius, one can then use the trusty ancient formula (C = 2πR) for calculating the circumference. One should note that multiple numbers are often given for the planet’s radius (and for the circumference as well) due to the fact that the planet has a larger radius and circumference at its equator than at its poles — this is because Earth, which has flattening at its North and South Poles, is not a perfect sphere but, rather, an oblate spheroid.

The results of Picard’s major project saw publication in 1671 as Mesure de la Terre. Soon after this work appeared, he was spending much of his time at the Paris astronomical observatory. Among his collaborators was the Danish astronomer Ole Romer, who did important early work on the speed of light, such as establishing that light has a finite speed, as opposed to being instantaneous.

As one of the leading scientific minds of his era, Picard corresponded with other eminent scientists, including Isaac Newton. The English polymath, in fact, later used Picard’s work in order to revise his own calculations on gravitation. The fact that someone of Newton’s significance would appropriate Picard’s work in this way is the ultimate validation of its worth.

Picard was also adept at engineering scientific equipment, which helped to facilitate accurate measurements and results. By using his custom-made tools, he was able to achieve a precision that was at least 30 times superior to his predecessors, as related by theComplete Dictionary of Scientific Biography. This book adds how his unprecedented precision led to a “great advance” in the field of cartography (map-making).

Though Picard collaborated on a project involving observations of Mars, much of his work was rather local in scope. He spent years working to determine the geographical coordinates of various cities in France. He was also given the assignment of surveying Versailles.

Just one month after his last day of observational fieldwork, Picard, then age 62, succumbed to a brief illness on October 12, 1682 (some sources incorrectly say he died several months earlier).

For countless centuries, humankind had gazed at the horizons of land and sea, contemplating the possible size of this place we inhabit. It took the ingenuity and perseverance of a French priest to give this universal question a worthy response.