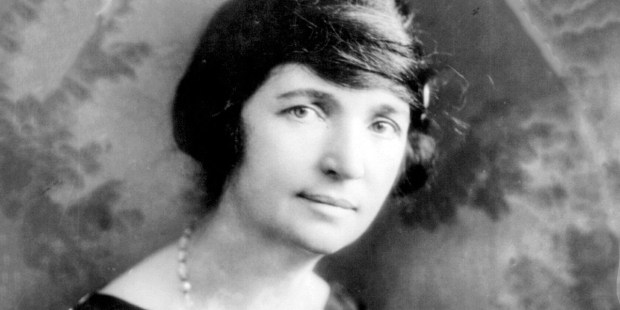 A group of Black pastors asked the Smithsonian to remove her likeness, because “Margaret Sanger was a racist who wanted to end the Black population through birth control and abortion.”

The American landscape is littered with fallen statues of notable historical figures tainted with the stench of racism. A notable statue still stands at the Smithsonian Museum’s National Portrait Gallery in Washington D.C., that of Margaret Sanger.

Time Magazine named Sanger one of the 20 most influential Americans in history. The Smithsonian says she “fought to achieve civil rights for disenfranchised or marginalized groups.” And yet a group of 13 legislators led by Senator Ted Cruz wrote the Smithsonian in 2015 asking them to take down her statue. Their reason:

“Ms. Sanger was an avowed advocate of eugenics and the extermination of groups of people she deemed as ‘undesirables.’ Specifically, Ms. Sanger singled out African Americans, among other minority groups, as deserving to be subjected to such horrific and inhumane treatment.”

By the same token, a group of Black pastors asked the Smithsonian to remove her likeness, because:

“Margaret Sanger was a racist who wanted to end the Black population through birth control and abortion.”

Nonetheless, her statue still stands, although cracks in her reputation are emerging. Just days ago, the New York Times reported that Planned Parenthood of Greater New York is removing their founder’s name, Margaret Sanger, from its Manhattan health clinic. Their spokesperson Karen Selzer explains:

“The removal of Margaret Sanger’s name from our building is both a necessary and overdue step to reckon with our legacy and acknowledge Planned Parenthood’s contributions to historical reproductive harm within communities of color.”

So what is Margaret Sanger’s legacy?

Iowans for LIFE explored Sanger’s creed in a unique theatrical pieced titled A Clash of Creeds. You can watch her unique worldview on display next to that of Ayn Rand and St. Mother Teresa, with G.K. Chesterton as moderator, in the clip above. (Go to IowansforLIFE.org to view the entire performance.)

So you can see indications of women’s self-determination in this statement.

“Eugenics is … the most adequate and thorough avenue to the solution of racial, political and social problems.”

According to the Merriam-Webster dictionary:

“Eugenics is the practice or advocacy of controlled selective breeding of human populations (as by sterilization) to improve the population’s genetic composition.”

Sanger called on Congress to establish a ‘Parliament of Population Directors,’ who would “direct and control the population through birth rates and immigration, and direct its distribution over the country according to national needs consistent with taste, fitness and interest of the individuals.”

Here, the legacy of Margaret Sanger takes an abrupt turn, for her Parliament would have immense, coercive power:

“They would be empowered to apply a stern and rigid policy of sterilization, and segregation to that grade of population whose progeny is already tainted, or whose inheritance is such that objectionable traits may be transmitted to offspring.

To insure the country against future burdens of maintenance for numerous offspring as may be born to feeble-minded parents, the government would pension all persons with transmissible disease who voluntarily consent to sterilization.

Even more, the whole dysgenic population would have its choice of segregation or sterilization.

No more children should be born when the parents, though healthy themselves, find that their children are physically or mentally defective.

By all means there should be no children when either mother or father suffers from such diseases as tuberculosis, gonorrhea, syphilis, cancer, epilepsy, insanity, drunkenness, and mental disorders.”

The legacy of Margaret Sanger is especially complicated when it comes to her connection with race relations. She spoke to the white supremacist group, the Ku Klux Klan. She once wrote (commenting on the ‘Negro Project‘ in a letter to Clarence Gamble, Dec. 10, 1939):

“The most successful educational approach to the Negro is through a religious appeal. We don’t want the word to get out that we want to exterminate the Negro population, and the minister is the man who can straighten out that idea if it ever occurs to any of their more rebellious members.”

Apologists suggest that this passage was merely “inartfully written.” And yet her legacy has impacted the African-American community disproportionately. In the city where she founded Planned Parenthood, New York, Black women are more likely to have an abortion than give birth. Nationally, Blacks represent 12% of the population but 36% of all abortions. According to the Guttmacher Institute, three out of four abortions are performed on women who are poor.

The irony is that Sanger opposed abortion:

“I assert that the hundreds of thousands of abortions performed in America each year are a disgrace to civilization.”

So is the legacy of Margaret Sanger primarily about liberating women, or is it about limiting undesirable populations?

“Frankly I had thought that at the time Roe was decided, there was concern about population growth and particularly growth in populations that we don’t want to have too many of.”

To support her concern, a letter came to light written by Ron Weddington, one of the attorneys who successfully argued the Roe v Wade case that legalized abortion. Writing to former president Bill Clinton in 1993, he said:

“I don’t think you are going to go very far in reforming the country until we have a better educated, healthier, wealthier population…. Start immediately to eliminate the barely educated, unhealthy and poor segment of our country [through abortion]…. There, I’ve said it. It’s what we all know is true, but we only whisper it, because as liberals who believe in individual rights, we view any program which might treat the disadvantaged differently as discriminatory, mean-spirited and … well … so Republican. Our survival depends upon our developing a population where everyone contributes. We don’t need more cannon fodder. We don’t need more parishioners. We don’t need more cheap labor. We don’t need more poor babies.”

To further bolster Justice Ginsberg’s concerns, the popular economics book Freakonomics stated that abortion was therapeutic to the greater society, because it reduced crime rates in the Black community, and that the eugenic effects are measurable. The authors, Steven D. Levitt and Stephen J. Dubner, explained why abortion is good, from their perspective:

“Fertility declines for black women are three times greater than for whites (12 percent compared with 4 percent). Given that homicide rates of black youths are roughly nine times higher than those of white youths, racial differences in the fertility effects of abortion are likely to translate into greater homicide reductions.”

So is the legacy of Margaret Sanger more a story of the emancipation of women or a eugenically-driven master plan to suppress the African American population?

Her complicated legacy is in the news. Her admirers and apologists are beginning to get pushback. Will her statue still be standing tomorrow?

This article was first published by Iowans for Life and is republished here with kind permission.