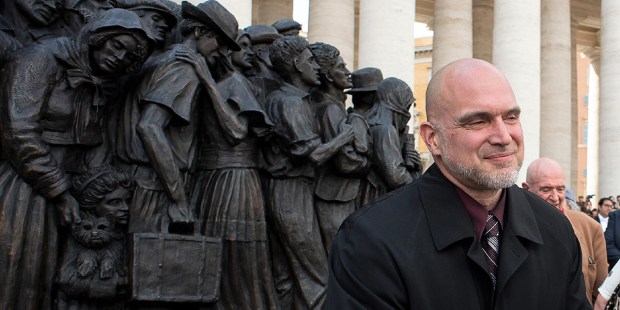 Timothy Schmalz preparing sculptures for each of the work’s 100 cantos for anniversary of Dante’s death.

Timothy Schmalz has become known as the artist responsible for the Homeless Jesus statues that grace park benches everywhere from Vancouver to the Vatican. He also mounted a display of a sculpture honoring migrants in St. Peter’s Square.

Now he is working on a monumental project to mark the 700th anniversary of the Italian poet Dante Alighieri — a 100-piece depiction in bronze of the Divine Comedy, Dante’s best-known epic poem.

According to Religion News Service, Schmalz’s work would be the first sculptural rendition of the entire three-book poem, which takes the reader on an epic tour of hell, purgatory and heaven.

Of those who recognize the literary reference — and Schmalz is concerned that the world is slowly forgetting the great medieval poet — many tend to focus on Dante’s gruesome depiction of the nine circles of hell and everyone who resides there, to the neglect of the rest. Indeed, Dante’s vision of the underworld is quite interesting and full of surprises. In a similar way, many critics feel that John Milton’s Paradise Lost, and his depiction of Satan, is far more interesting than Paradise Regained.

“Dante is often presented in a very secular way,” Schmalz told RNS’s Claire Giangravé. Limiting one’s focus to the Inferno means “not giving the proper representation of Dante and also the Christian ideas that are in the Divine Comedy. As a Catholic sculptor I have been very angry about this for many years.”

In order to “right this wrong,” Schmalz said, he is determined to create a sculpture for each of the 100 cantos, or chapters, of the Divine Comedy.

Giangravé notes that Botticelli, Gustave Doré and William Blake have depicted the entire work in drawings or etchings, but Schmalz would be the first to do so with sculpture.

“I realized why it hasn’t been done before,” he said. “It’s so much work.”

But with the COVID-19 restrictions, the Canadian artist is essentially “locked away” in his studio in Ontario and has the time for the massive undertaking. Interestingly, he said, when Dante wrote the Divine Comedy, he was in exile from his native Florence.

“I am sculpting it while all the world is in social isolation, in a sense, in exile,” Schmalz said.

There is no definite venue set for the work to be exhibited, though it will probably be somewhere in Italy. It is expected to be completed by March 2021. Dante, who was born in 1265, died in Ravenna in September 1321. RNS notes:

Schmalz has a vision for the project that he describes as an “open air book” — a garden where the bronze sculptures, styled to look like pages, will lead the viewer through Dante’s masterpiece, as they “read the poem with their eyes and turn the pages with their feet,” from the burning torments of hell to the celestial imagery of heaven.

Schmalz said he believes such an exhibition could serve as a “visual ambassador” that will rekindle interest in Dante and his Divine Comedy.