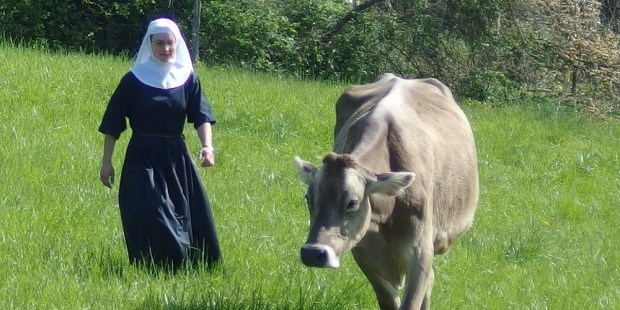 The new venture is based on a timeless medieval system, and the sisters hope it will be a lasting gift to the region.

The 27 Cistercian nuns living in the Abbey of Boulaur in Occitanie, France, sum up their new venture as “a start-up of the 12th century in 21st-century style.” Their project consists of recreating a medieval-style monastic grange (a farmhouse with other buildings attached) to produce cheese, jam, pâté, and flour using resources produced at the convent’s 112-acre property, which is located in a rural area, with orchards, cows, pigs, and other farm staples.

To launch the project, they began to restore the old abbey and rebuild a large stable, with the help of volunteers including non-Catholics who were enthusiastic about the initiative. The volunteers even helped to make bricks using clay from the abbey land. Other supporters are helping with donations raised via crowdfunding, through the CredoFunding platform.

Sister Anne, the project’s overseer, spoke with reporter Solène Tadié, Europe correspondent for the National Catholic Register, about the community’s hopes with this project:

“Our goal is not just to earn a living for the coming 30 years. We want to build for eternity, to build a long-lasting historic site to be passed on to future generations—and the Middle Ages are the perfect example of such a philosophy.”

The project, named “Grange 21″ in reference to the current century, will include a large library to preserve the community’s most valuable manuscripts, dating back to the 13th and 14th centuries.

Read more:
These Dominican sisters are making their own electricity

Sister Anne recalls that it was the dynamics of medieval monasteries that enabled the Church to sustainably shape Western culture. She considers that, in our time, the renewal of the monastic life can also transform culture—and souls.

By making the abbey a new cultural center, the nuns of Boulaur also want to support local businesses and the creation of new jobs, driving a wave of economic benefits for the entire region. Sister Anne said,

“People in the region are very sensitive to what we are doing, even because we give a total priority to local businesses for the completion of work at the abbey, just like we favor short distribution channels, direct selling and quality products made onsite. We are eager to create a brand-new adventure which will enable us to earn a living while supporting as many people as we can, taking into account the evolutions of our society.”

The community, which follows the Rule of St. Benedict, currently has 27 religious and will receive another four in September. The average age of the sisters is 45. Since 2015, they’ve been working to improve their production and positively impact the economy of the region, which is relatively poor by French standards.

We wish the sisters all the best in their new venture!