Why was Jesus transfigured?

Jesus was transfigured before his apostles to strengthen their faith and give them a foretaste of Heaven.

During Jesus’ life on earth he performed many miracles that were seen by large crowds.

However, there was one miracle that he revealed only to a small group of his apostles, three to be exact. He revealed to them his heavenly glory and allowed them to glimpse the beauty of his wondrous light.

Why did Jesus do that?

The Catechism of the Catholic Church explains how the transfiguration bolstered the faith of the core apostles, the ones who would lead the Church after his death.

For a moment Jesus discloses his divine glory, confirming Peter’s confession. (CCC 555)Christ’s Transfiguration aims at strengthening the apostles’ faith in anticipation of his Passion: the ascent on to the “high mountain” prepares for the ascent to Calvary. Christ, Head of the Church, manifests what his Body contains and radiates in the sacraments: “the hope of glory.” (CCC 568)

The reason why this would strengthen their faith, is that they were able to glimpse the glory being prepared for them in Heaven.

St. Thomas Aquinas echoes this reasoning in his Summa Theologiae.

To which glory He brings those who follow the footsteps of His Passion, according to Acts 14:21: “Through many tribulations we must enter into the kingdom of God.” Therefore it was fitting that He should show His disciples the glory of His clarity (which is to be transfigured), to which He will configure those who are His…”Hence Bede says on Mark 8:39: “By His loving foresight He allowed them to taste for a short time the contemplation of eternal joy, so that they might bear persecution bravely.“

Similarly, Jesus’ transfiguration was not only meant for those three apostles, but after being shared with all of Jesus’ disciples, it became an encouragement for all Christians.

The Transfiguration gives us a foretaste of Christ’s glorious coming, when he “will change our lowly body to be like his glorious body.” But it also recalls that “it is through many persecutions that we must enter the kingdom of God” (CCC 556)

Everything about Jesus’ life had great purpose, and the transfiguration can help us even today look forward to the glory that awaits us after the passion of this life.

Moses, Elijah, and Jesus: Why are they all there at the Transfiguration? 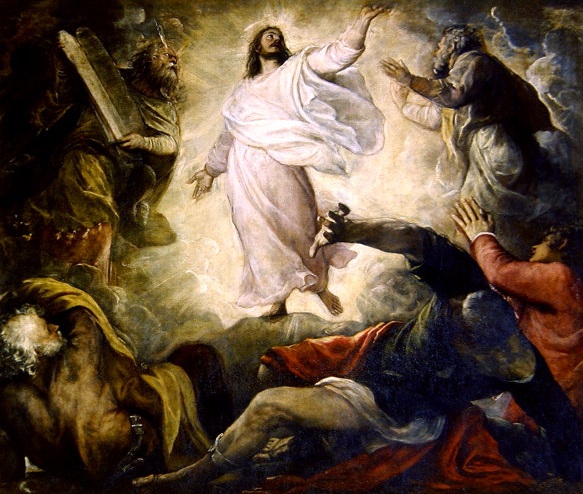