Nazareth hotel exhibits artifacts excavated from its own grounds 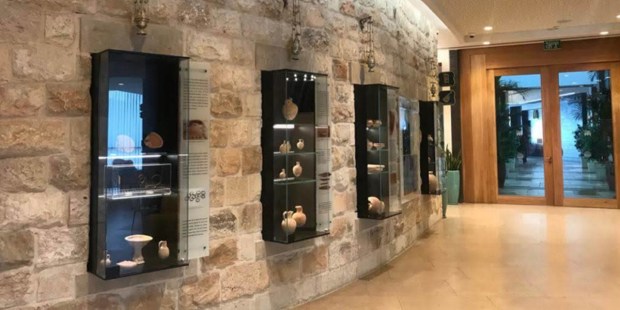 Routine construction turned archaeological excavation yeilds relics from as far back as 4,000 years ago.

The Holy Land is so steeped in history that it’s hard to take a step without inadvertently discovering a treasure trove of historical items or a long-forgotten subterranean locale. In the case of the Legacy Hotel, in Nazareth, both were found after a 2010 construction project stumbled on an underground chamber, leading Israeli Antiquities Authority (IAA) to order a full-scale excavation.

Daniel Nisinman of Jerusalem Post reports that the project was meant to convert a garage on the hotel’s property into more guest space, but once construction began the workers discovered four shafts leading to an underground network of caves. Carved out of the rock, these caves served as a family crypt during the Middle Bronze Age, the Late Bronze Age, and even into the Iron Age; a span of about 1,000 years from 2000 BC to 1000 BC.

It’s been about a decade since the excavation began, but now that it’s done, the Legacy Hotel has gained permission to display the discoveries in a showroom in the hotel. Nisinman went on to describe some of the artifacts that are now on exhibition for visitors to peruse:

The items, which include bowls, melee weapons, and jewelry, offer a glimpse into previously unfamiliar parts of Nazareth’s past.

Yardena Alexandre, the IAA representative who led the effort, said that the items were most likely used in burial ceremonies, with the belief that they would accompany the deceased family members into the next life. Alexandre said:

“… the archaeological findings expose new information about the history of the ancient village, that is not told in the written sources.” She added, “As it turns out, Nazareth, which is normally associated with Jesus (Christ), who grow up in the Jewish village of Nazareth, attracted many groups as early as 2,000 years before his time.”