Don’t own a relic? Here’s how you can make one 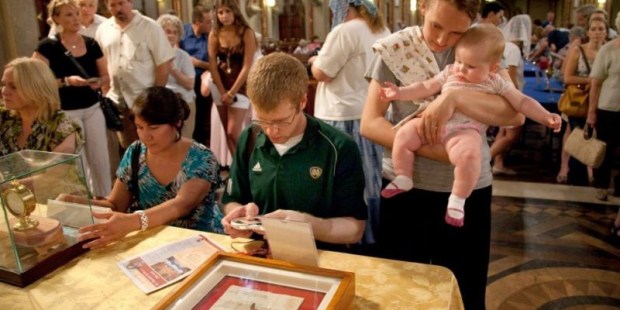 Third-class relics are any object touched to a first- or second-class one.

Relics have been a time-honored phenomenon in the Church. Relics — parts of bodies of saints or objects used in the crucifixion of Christ — are venerated by the faithful and serve as reminders that we have saintly intercessors who have gone before us and can pray for us.

According to the University of Dayton, the word “relic” comes from the Latin reliquia (remains) and relinquere (to leave behind).

The Council of Trent taught that through the veneration of relics, “many benefits are bestowed by God on men,” said the University of Dayton. It continued:

Last year, when the Knights of Columbus sponsored a nationwide tour of the heart of St. John Vianney, members of the faithful who went to venerate the relic could be seen touching prayer cards, rosaries and other items to the small case that enclosed the heart.

For some people, this may have simply been a devout act of veneration of the saint who is known as the patron saint of parish priests. For others, it might have been their way of “making” a third-class relic for personal devotion.

“I would say that 3rd class relics have the same basic ‘function’ as the higher classes of relics,” said Brother Joseph Brom of the Canons Regular of St. John Cantius in Chicago. “They are a reminder of the holiness of the saints and of incarnational, tangible reality of the Church. Though, they are less precious because aren’t a ‘limited resource’ and they are not to be displayed for public veneration because they are not regulated and authenticated as 1st and 2nd class relics are.”

Shaun McAfee, editor of EpicPew, wrote about a similar experience he had when he lived in Rome. In an article in the National Catholic Register, he described going to Mass in Rome on All Saints Day. In the homily, the priest mentioned that he owned several relics.

“Taking advantage of every situation that might increase my faith and holiness, I had an idea: create a third-class relic,” McAfee wrote.

For those interested in doing this, the question arises: where might one find a first-class relic from which to make a third-class? Many churches and cathedrals, particularly older ones, contain relics, which might be available. So would shrines dedicated to particular saints, not to speak of the final resting place of the canonized.

In addition, there are several places of interest that have an abundance of relics:

St. John Cantius Church, Chicago is home to about 1,800 relics. A small portion are on public display.

St. Anthony Chapel in Pittsburgh claims to be home to the largest collection of publicly venerable Christian relics in the world outside of the Vatican, with 5,000 relics in its collection.

Unfortunately, Treasures of the Church has suspended its schedule at least through November due to the COVID-19 pandemic. But perhaps that is just one more reason to pray for the intercession of saints for an end to the current health crisis.