The first ever LEGO model of the National Shrine in D.C. 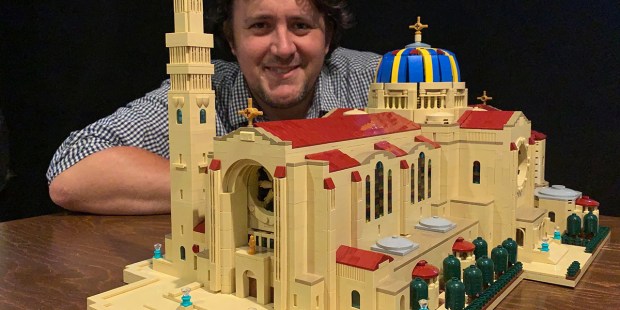 The long months of social distance and isolation have been hard on most, but they have allowed some to flex their creative sides, and for John Davisson that meant exploring his childhood love of building with LEGOs. After constructing an accurate recreation of his own home with the small plastic blocks, he set his sights a lot higher to make a faithful reconstruction of Washington, D.C.’s Basilica of the National Shrine of the Immaculate Conception.

The Catholic Standard reports that Davisson has always had a soft spot for the National Shrine, which as a D.C. resident he often enjoys driving past. So when he needed a new subject to model, he began to research the structure, visiting the site to snap photos as well as utilizing 3D tours to map out the interior. He said:

“I’ve always thought it was a really remarkable building. When you come over the horizon of a hill in D.C., you see the basilica. Especially at night, it’s a really cool sight.”

In an interview with the National Shrine website, Davisson explained that the project took him two months to complete. The first month was all about preparation, during which time Davisson built the whole model in a program called Studio, which was released by LEGO for the purposes of experimenting with builds. From there, he said, it took him about two weeks to gather all necessary pieces, and another two weeks to construct the model.

With 8,100 individual parts, the first-ever LEGO model of the Basilica of the National Shrine of the Immaculate…

The program was important, because it allowed Davisson to decide on a scale of 1:250. He said that the whole project needed 8,100 LEGOs to complete, with the most time-consuming sections being the dome, requiring a whopping 400 pieces, and the rose windows, which took about 100 pieces each. The entire model weighs about 15 pounds.

The Catholic Standard noted that Davisson keeps the model in his home and has already settled on his next project, a replica of the National Museum of African American History and Culture.

The National Shrine website has some pictures of the beautiful interior of Davisson’s model. Click here to view the slideshow.