Are virtual happy hours worth your time? 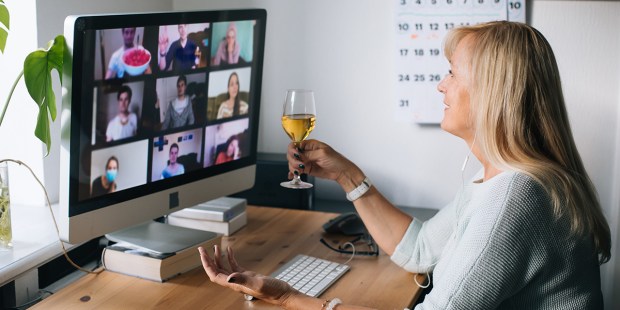 I was surprised to discover there is actual virtue in gathering for social time over food and drinks online.

I’ve always been a big fan of happy hour. When done well, it combines all of my favorite things: food, drinks, leaving work early, hanging out with friends, and last but not least, saving money — at least theoretically.

You’d imagine, then, that when the coronavirus calamity came upon us and we could no longer congregate together like usual, I’d be all about the virtual happy hour. But I found myself cynical. I had given up drinking for Lent and it seemed to be a bit too much of an excuse to drink alone, just when I had learned over those 40 days that sometimes life is better without booze. The computer screen added a sense of artificiality to it. Suffice it to say I wasn’t in any hurry to try it out.

When I finally did, however, I was pleasantly surprised. The video conference thing took some getting used to, sure, but before too long it felt fairly natural, and by the end I was already looking forward to the next one.

So if you find yourself skeptical like I was, or just wondering whether they’re worth it, here are a few reasons to think there’s virtue in a virtual happy hour.

My first memory of happy hour is one I’ll never forget. I was on a college leadership retreat at a resort in Frisco, Colorado with about eight other dudes led by the late, great Fr. Bill Baer. Fr. Baer had many gifts, but one of his greatest was a simple knack for bringing people together for rich, edifying leisure. He always demanded your best but was also able to put you at ease, and that combination of factors produced some of the greatest *hangs* I’ve ever been a part of.

Our first day on retreat consisted of the liturgy of the hours, Mass, presentations, meals, and something on the calendar called “happy hour,” right before dinner. I wasn’t sure what to expect, because I was in college, after all, and I’m not sure I’d ever done a “happy hour” before.

The time came, and we went into the kitchen and dining area of one of the suites, pulled out some bottles of beer and cans of soda and a nice array of chips (Fr. Baer loved his chips), and we just … hung out. And that was it. And it was awesome.

As I mentioned, part of why I was unsure if I’d like a virtual happy hour is the essentially artificial nature of it — the sense that you’re not actually hanging out — and the concern that it would feel like, well, a Zoom meeting. There’s something about deciding on an exact time you’ll all hop on your computers, and even sending out the link, code, password … that just feels sterile. Certainly not fun.

Interestingly, in my experience of doing a handful of virtual happy hours over the past month or so, I think there’s something about the forced nature of all this that adds meaning to it. Because let’s be honest: relationships require work. Sure, some of the best friendships seem somewhat easy and effortless. But some of my most rewarding friendships are those that have been maintained only by being very intentional about spending time with each other and keeping up with each other’s lives.

That first happy hour in Frisco was particularly rich because it was with a bunch of great guys and our mentor. But also because it was intentional. We set aside time, with some tasty food and drinks of course, to spend quality time together, free from distraction.

Read more:
I fasted for 24 hours — here’s what happened

3
Bridging the gap of space and availability.

Speaking of making relationships work, since graduating from college a lot of my best friends have scattered far and wide throughout the country and even beyond. Many (most?) have started families of their own and some of them have full, rowdy houses of kids. We all have different careers and schedules and availability, which means it can be difficult if not impossible to get even a few of us all together in one place at the same time.

Of course, technology has helped to remedy this problem. Recently I was able to hop on a Zoom call with six other members of a retreat team (7/10 total) with whom I spent nine months over a decade ago. Never before over all of those years were we able to all share the same conversation — until now. And it was all made possible by videoconferencing technology, and some good ol’ intentionality.

My main group of buddies is a good slice of your classic masculine, white, midwestern American dudes, with all the requisite stereotypes, for better or for worse. On a normal (non-pandemic-adjusted) Friday night, we would meet at the local sports bar and eat wings (or whatever fish is on the menu …), watch the local teams play, and shoot the breeze. If our conversation went beyond sports, we might talk about the women we’re dating or the TV show some of us are watching.

I can honestly say that the first virtual happy hour we did together might have been the first time we actually asked each other “how are you doing?” Like really. Not just like oh how’s work going, but how we are actually doing with the coronavirus shutting everything down and having to be by ourselves for most of the week.

Who knows exactly why. It could be that there was a sense of a shared suffering we hadn’t quite ever experienced before. It could be that the pandemic had been so disorienting that we weren’t quite sure what we were doing and that it was any different. It could be that we’re just lonely, and that brought it out of us. But there’s been something different about our Zoom hangouts than our normal ones, that’s for sure. Not the whole time, and in fact much of it is very normal and familiar, almost to the point that you can forget you’re staring at a screen of your buddies instead of your buddies themselves. But something different nonetheless.

So, no, virtual happy hours aren’t The Real Thing. But they’re still happy hour, and where they lack for realness, they can make up for it by way of ease of access, intentionality, and even some vulnerability — a different sort of realness, if you will.

So if you haven’t yet, round up at least two other people (because even a 1-on-1 at a “real” happy hour involves a bartender and/or server), grab a drink or two, a favorite snack, and fire up the ol’ webcam. I’m willing to bet a Northeast Minneapolis IPA (and maybe even some ripple potato chips and French onion dip) that you won’t regret it.

Read more:
12 Foods and drinks and their patron saints