How to join a Catholic religious order 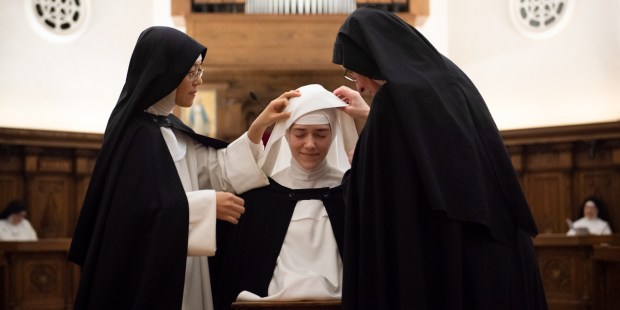 Whether you are discerning the call to become a nun or a monk, the path to consecrated religious life is similar in the steps required.

The call to religious life is a special vocation within the Catholic Church, one that requires a great deal of sacrifice. It is a vocation where a woman or man gives-up a life in the world and dedicates their entire life to God, within the context of a religious community.

Catholic religious men and women freely embrace this call to seclusion and does so with the intention of drawing closer to God and lifting up the world outside the monastery in prayer.

The Catechism of the Catholic Church explains, “The state of consecrated life is thus one way of experiencing a ‘more intimate’ consecration, rooted in Baptism and dedicated totally to God. In the consecrated life, Christ’s faithful, moved by the Holy Spirit, propose to follow Christ more nearly, to give themselves to God who is loved above all and, pursuing the perfection of charity in the service of the Kingdom, to signify and proclaim in the Church the glory of the world to come” (CCC 916).

For the purposes of this article, we will focus on the general steps required to embrace a call to religious life, as each religious community has their own unique standards and process.

1
Discernment of a Divine Calling

The first step is always discernment. This does not mean the person needs to be 100% certain they are called to the consecrated religious life, but that they need to have a considerable intuition that God may be calling them in that direction. Discernment includes personal prayer and discussion with a trusted spiritual director.

Discernment can begin in childhood, or later in life. Either way, discernment normally spans years, though there are rare occurrences when an authentic calling is received in a shorter amount of time.

After careful discernment and consulting a spiritual director, the next step is to contact a religious order for an extended visit. It is nearly impossible to understand what religious life will be like unless you see for yourself. This is why it is crucial to visit a religious order and live there for several days, weeks or months, to get a better sense of God’s calling.

It typically becomes very clear whether or not it will be a good fit. Most often someone discerning a call to religious life will visit multiple monasteries or communities before finding the place where God is calling them.

In the past entering a religious order was often less complicated, and nearly everyone was admitted, but in the modern world, all Catholic organizations have an in-depth process of psychological examinations and criminal background checks. This stage is an important part of the discernment process, as it will identify areas that are problematic. Some areas can be improved with proper counseling and growth, while others are impediments.

Living in a community for the rest of your life is not easy, so if there are any major psychological issues, that person will need to resolve those before entering a community.

This allows for further discernment, but is a major step, as it requires a commitment to live with the community for a few years to test out your vocation.

At the conclusion of the novitiate, “temporary” vows are professed, which means that the individual vows to live with the community, but is allowed to exit the religious order if it turns out God is calling them elsewhere.

Typically these vows last for sets of 1-3 years and can be renewed. This could be considered a time of “engagement,” similar to those who have become engaged to be married. It is a stronger commitment to religious life, but the individual can still exit the order without much problem.

The last and final step in religious life is “perpetual vows” or “solemn profession.” This could be considered the “wedding day” for the individual, when they solemnly profess to remain committed to God and the community until death.

The average number of years required to profess perpetual vows is 8-12 years. By that point it should be abundantly clear that God is calling them to a specific religious order.

The religious life is a beautiful vocation, one that is entirely dedicated to God and reminds us all of our final end, union with God for all eternity.