Lessons on joy from a disabled saint 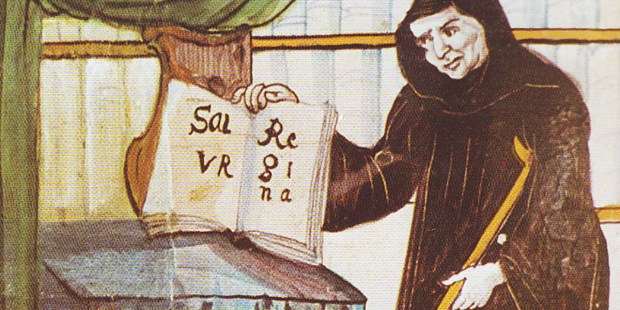 Bl. Herman had a cleft palate, cerebral palsy and spina bifida, but he was the most joyful monk in the monastery.

Physical health is such a highly prized goal in modern society that when we become sick or severely disabled, it is tempting to give up on life. We can be tempted to grow in despair and lament the loss of our physical abilities.

For a similar reason, many children who are diagnosed with disabilities are sadly discarded, and viewed by many as mistakes.

Yet one saint shows us that our physical health should not dictate our spiritual health and that we can still retain joy in the midst of our suffering.

Bl. Herman “the Cripple” lived in the 11th century and was destined for failure. In an early 20th-century periodical entitled The Month, Herman’s early life is recounted.

Their son Herman was most horribly crippled and, indeed, deformed, “in the outer man,” says his friend and biographer, Berthold … For the little boy’s limbs were so hideously contorted that he could not move himself from this place to that; could scarcely sit, even, in the chair they fashioned for him; even his fingers were all but too weak and knotted to write; even his mouth, it seems, was deformed, and his lips and tongue formed words barely to be understood.

In pagan worlds the child would have been exposed upon the mountains and would have perished.

Yet, his parents did not give up on Herman, and entrusted him to a nearby monastery. It is remarkable that the monks accepted him and were extremely patient with him, teaching him the depths of religion, science and mathematics.

Against all odds, Herman became a scholar. Not only that, he was the happiest monk in the monastery!

This man, unable to walk, to sit, to lie properly; who can never once in his life have been comfortable; eager to write, and with fingers that scarce served him; full of ideas, and having to stammer them out by means of “barely intelligible sounds,” Herman then gathers round himself all the adjectives you might least expect. Much of his biographer’s Latin is hard to be quite sure about: but here there is no possibility of a mistake.

[He] was lucundus; pleasant, sociable, you may say. Amabilis, benevolus: kind,easy to talk to; hilarissimus, always laughing … Tota alacritate festivus: he made haste to be cheerful: you don’t comment thus upon a cheerfulness, which a man just slips into! … he showed himself considerate and adaptable to everyone, so much so, that ‘making himself all things to all men,’ everybody loved him.

The example of Herman shows clearly to us that joy should never be based on physical well-being. We can (and should) be joyful both in good times and in bad, in sickness and in health.

Herman’s joy was based solely in Jesus Christ, and he was thrilled to be alive! Life, for Herman, was a gift, and he spent his years on earth expressing that joy.

This joy was even expressed in some of the most popular hymns of the Catholic Church. It is said Bl. Herman composed the “Salve Regina,” “Veni Sancte Spiritus,” and “Alma Redemptoris Mater.”

The life of Bl. Herman is truly remarkable, and his story needs to be heard in our modern world, where we are in such need of true and lasting joy.