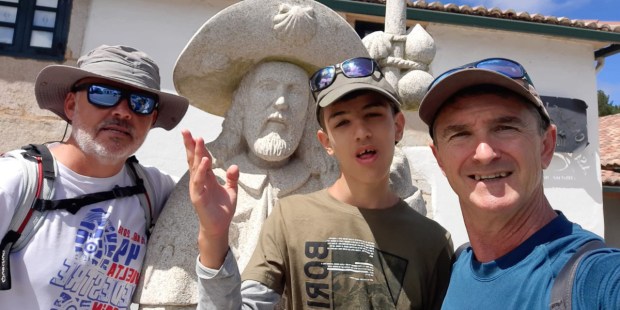 The Way of St. James pilgrimage took them extra time, but the father said he experienced “the greatness of God.”

“There is no fear here,” said Ildefonso Calvente. He’s the father of Álvaro, a 15-year-old boy with a disability. Together, they embarked on the Camino de Santiago (the Way of St. James) in the company of a friend, Francisco Javier Millán.

They opened a Twitter account called “El Camino de Álvaro” (The Way of Álvaro) and already have more than 3,400 followers. Álvaro is a magnet.

They live in Málaga. Álvaro is the seventh of 10 siblings and “was born with a mental disability due to a mutation of two genes,” explains his father. “We didn’t realize it until the baby was two months old and we started to see that he wasn’t doing what was normal for his age.”

Álvaro’s disability “turned out to be a blessing for the family. It was fresh air for our home. With Álvaro you see a wave of love coming into your house. You have to dedicate time and attention to him, of course, but he gives us so much more,” explains Ildefonso.

The three pilgrims made the journey with religious intent. “We’re members of the Neocatechumenal Way, from the parish of San Patrick in Málaga, and two bus loads of pilgrims had been organized to go to Santiago de Compostela this summer. But with the pandemic it wasn’t possible, and the trip was cancelled.”

However, “Álvaro doesn’t forget things, and he insisted on doing the Camino de Santiago, so here we are, on the move,” explained Ildefonso in a phone interview during the pilgrimage, while commenting that the three of them were climbing a hill, passing through a leafy forest, and twice the communication by phone was cut off. There, nature rules. Ildefonso said,

“Some do the route for religious reasons, as we do. Others do it just to get in touch with nature. In any case, that also leads to God, who loves us all equally. We see that many places are closed, but the hostels are open and they take care of us: They’ve called us to ask how we are and when we plan to arrive, they ask us if we need anything, they send a farewell text message …”

The father and son undertook the journey at their own pace. “Álvaro stops to greet the cows, the bulls and all the animals we meet,” Ildefonso explained, describing his son as a boy “who is happy and who has always connected with the things related to God. He’s happy and makes us all happy.”

They were accompanied on their pilgrimage by Francisco Javier, “who was going to be the driver of the pilgrimage bus” and who, in the words of Ildefonso, “is helping us in silence, like St. Joseph.”

A journey of 111 kilometres

From their home in Málaga, in southern Spain, they traveled to Santiago de Compostela in the north by car, and from there they arrived on June 7 in Sarria, the little village where they started their pilgrimage. They had to go 70 miles on foot to earn their pilgrim’s certificate.

In only the first few hours of their pilgrimage, they experienced the full spectrum of the weather: “Yesterday a storm suddenly hit us,” Ildefonso reported early on during of their walk. “There was a thunderclap that frightened Álvaro and everything. And then it got really hot. In a few days we’ve already seen that the weather changes a lot, and that’s also part of a pilgrim’s experience”.

“We don’t want to prove anything”

“Our goal is not pretentious. We don’t want to prove anything or give lessons to anyone. It’s just about making the walk with Álvaro and enjoying it with Álvaro,” said Ildefonso, who was “overwhelmed” by the number of new followers who kept appearing on his Twitter account at times and by the large number of requests they receive for private messages. He said,

“It’s kind of a responsibility to pray for the people who ask you. You realize how much God is needed and how much people need prayer.”

Without any pretense, as Ildefonso says, they got up each day at about 7 in the morning and set off. He said, “We sing, we see the scenery, we stop at the churches because Álvaro likes them very much … Álvaro repeats the whole Mass because he knows it by heart and sees everything as God’s work. We pray as we go: We pray lauds, the Rosary …”

Afraid of the coronavirus? Of the difficulties or the unexpected events of a trip with a disabled child? “There’s no fear here,” says Ildefonso, and he recalls the phrase from the Gospel that St. John Paul II often quoted: “Do not be afraid!”

“My wife is a clinical assistant and works at the Carlos Haya Hospital in Málaga, where they’re engaged in a serious battle with COVID-19,″ he told Aleteia. “She has stayed with the 8 children we still have at home and makes this trip with Álvaro possible,” he says.

Ildefonso is a construction manager. The pandemic was a professional blow, and he said, “on the way I’ll also think about what to do when I get back home.”

Walking from Sarria meant 6 days of pilgrimage, which is one more day than the journey usually takes for other pilgrims. But taking extra time is a necessary adaptation for Álvaro. During our phone interview, I heard the boy singing and laughing in the background, and saying “Kiko” (referring to Kiko Argüello, the founder of the Neocatechumenate).

Álvaro’s pilgrimage being live tweeted moves other people. “I had just arrived home,” says a tweeter who follows him, “after an intense day’s work. I was complaining. I opened Twitter, I saw this message from Álvaro, and it changed my heart. I can only thank God. Thank you for your testimony.”

Read more:
Group of pilgrims trapped together in Spain become like family

Álvaro, his father, and Francisco arrived at the cathedral of St. James on July 13. It was a thrilling moment. In an interview with COPE, Ildefonso recounts that the three were overwhelmed with emotion. The two adults cried, whereas Álvaro “started to jump with joy, which is the way he expresses himself.”

Due to the pandemic, the number of people allowed inside the cathedral was very restricted (only 70), and unfortunately the trio of pilgrims arrived too late to enter and see the tomb of the Apostle St. James in person. They weren’t discouraged, however; Ildefonso tweeted a video in which he pointed out that God is everywhere, and that faith isn’t a statue or a place.

“The meaning of the pilgrimage isn’t to go and see and kiss [the statue of] the saint, but to have been able to see the greatness of God through the simplicity of Álvaro,” he told COPE.

The next morning the three were up early to drive back home, praying on the way. In a way, it’s another phase of their pilgrimage, one we all share: the pilgrimage through this world on the way to our final encounter with God.

Read more:
You can now hike the Camino de Santiago from anywhere in the world

Read more:
9 Celebrities who have made the Camino de Santiago pilgrimage