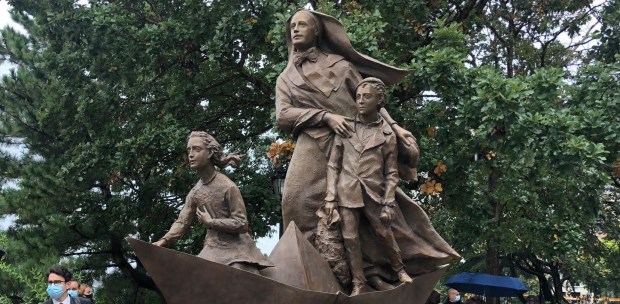 Mother Frances Cabrini sailed to New York from Italy in 1889, just three years after the dedication of the Statue of Liberty. It’s as if Lady Liberty was welcoming immigrants coming into New York harbor.

Now, a statue of St. Frances Xavier Cabrini, the patron saint of immigrants, overlooks those same waters, gazing out toward the towering statue and Ellis Island, where so many newcomers had been processed over the years.

On Monday, Columbus Day, the governor of New York State, the Catholic bishop of Brooklyn, N.Y., and representatives of the Italian-American community unveiled a newly-commissioned statue of Mother Cabrini in Manhattan’s Battery Park City.

At the opposite end of Manhattan Island is the St. Frances Xavier Cabrini Shrine, where the saint’s remains are venerated.

The new statue, designed by artists Jill Burkee-Biagi and Giancarlo Biagi, represents several aspects of her life. It shows Mother Cabrini on a paper boat, accompanied by two immigrant children. But the girl is a “reflection” of Cabrini when she was younger. When she was a little girl in Lombardy, Francesca Cabrini would fill paper boats with violets, calling them her missionaries, and send them down a stream, Burkee-Biagi explained. She holds a book, representing her dedication to education.

The boy in the sculpture clutches his luggage in one hand and an Italian musical instrument in the other, symbolic of the culture Italians brought to the New World.

Biagi said that a mosaic beneath the sculpture was created with riverbed stones from Mother Cabrini’s birthplace.

Bishop Nicholas DiMarzio of Brooklyn said he hopes that people who visit the memorial “will recognize that history should be repeated, that there was a care for the outcast and marginalized which Mother Cabrini understood, and we need that same care today. This is not just history, we want to make history with a new understanding of how we take care of people.”

Bishop DiMarzio is co-chairman of the Mother Cabrini Memorial Commission. Last year, Mother Cabrini received the most nominations in the “She Built NYC” competition, but was not selected for a statue to be built in her honor. The program was designed to create more statues throughout the five boroughs honoring women. Bishop DiMarzio organized an effort to raise funds and public support to get her statue built in spite of the city’s decision.

At the 2019 New York City Columbus Day parade, DiMarzio rode aboard a float with a statue of Mother Cabrini which was cheered along the entire parade route. At the conclusion of the parade, New York Governor Andrew Cuomo announced New York State’s commitment to work with the Columbus Citizens Foundation and the Diocese of Brooklyn, to ensure Mother Cabrini was permanently honored.

“May this statue serve to remind us of the principles that made us great,” Cuomo said at the unveiling. “Today, the lesson of Mother Cabrini is even more vital because of the difficulties we are facing.”

Quoting Mother Cabrini, the governor said, “The world is poisoned with erroneous theories and needs to be taught sane doctrines. But it is difficult to strengthen what has become crooked.”

In 1946, Mother Cabrini was canonized a saint by Pope Pius XII in recognition of her service to all people. She was named the Patroness of Immigrants in 1950.

John Leo Heyer II, a member of the Mother Cabrini Memorial Commission, commented, “This statue of Mother Cabrini recognizes both her contributions as an Italian immigrant woman, as well as those of all Italian American and immigrant women. She is a shining symbol of what it means to care for the other person, the sick, the uneducated, the economically challenged and the stranger, always putting the needs of society’s most vulnerable above her own.”

The Diocese of Brooklyn has also raised funds to pay for the construction of a Mother Cabrini monument in Brooklyn. Those project details will be announced at a later date.