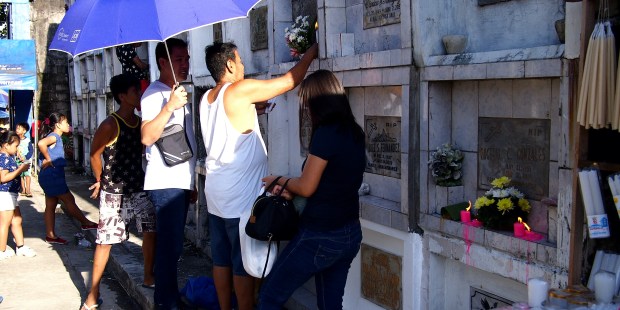 As in many predominantly Catholic countries, All Saints’ Day and All Souls’ Day are a time for people in the Philippines to visit their dearly departed in cemeteries.

This year, however, the threat of a deadly pandemic is putting a wall up between the living and the dead. To avoid the crowded conditions that might contribute to the spread of the virus, many, if not all, cemeteries in the Philippines will be closed to the public during the time period when Filipinos normally come for a visit.

The Catholic bishops of the island nation, however, have launched an online initiative through which people can pay their respects. They revived an old website called Undas Online and announced Tuesday that it would begin taking prayer requests for the deceased.

“Undas” is the word used in the Philippines for All Souls’ Day. The website was originally for Filipinos working abroad, including seafarers, who could not be home for the annual celebrations. Originally having offered only a way for people to submit prayer requests, it later added a “virtual experience in observing Undas,” the Bishops’ Conference news site said.

“There will be live online Masses that will be streamed from different places,” said Msgr. Pedro Quitorio, CBCP Media Office Director. “One can even light a candle online while praying for their dear departed.”

The website also offers audio and video reflection and catechesis on All Saints’ and All Souls’ Day.

In Manila, Bishop Broderick Pabillo encouraged the faithful to observe Undas by attending Mass, said the bishops’ conference news site. He said that more Masses will be added to accommodate churchgoers and still observe physical distancing.

“On November 1 and 2, all are encouraged to go to Church and offer Mass for our beloved dead,” the bishop said. “The Holy Eucharist is the best prayer that we can offer.”

“Millions of Filipinos normally troop to cemeteries on All Saints’ Day and All Souls’ Day on Nov. 1-2 to remember departed loved ones,” wrote Manila-based Joseph Peter Calleja of the Union of Catholic Asian News, or UCAN.

According to a 2014 report in the Philippine Inquirer, the occasion has become a family affair.

“The annual pilgrimage to the cemeteries also triggers a mass exodus from Manila, when tens of thousands travel to interior provinces where their relatives are buried,” the Inquirer reported.

But with the Philippines and the world still grappling with a pandemic, such scenes are unlikely this year.