How to recognize the symbols of martyrdom in art 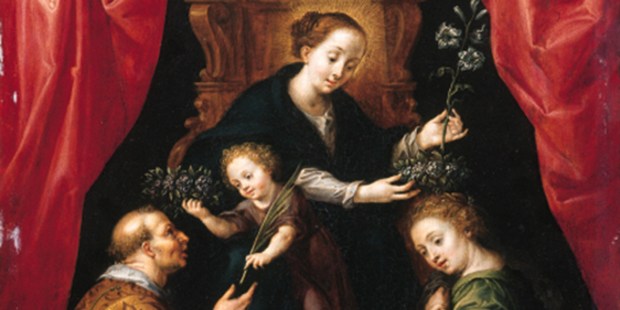 Palm trees and crowns have been used for centuries as symbols of the victory of faith.

Click here to launch the slideshow
From St. Sebastian, who was killed by hundreds of arrows, to St. Lawrence, who was burned alive, martyrs are remembered for the brutal deaths they endured. But martyrdom itself is not just a brutal act of violence. It is indeed considered the ultimate victory of good against evil, with martyrs choosing to give up their very lives for God. For this reason, artists often opt for positive symbols when it comes to symbolize martyrdom in art such as palm leaves or laurel crowns.

In medieval art it was common for painters to feature images of the martyr’s death with a winged figure, symbolizing Victory, carrying a crown. For example, the mosaic on the right side of the nave inside Ravenna’s Sant’Apollinare Nuovo church features a procession of virgin martyrs holding crowns and white petal wreaths in their hands. Between each martyr stands an iconic representation of a palm tree.

Palm trees have perhaps been the most commonly used symbol of martyrdom in art. It was once thought that palm plants would die while generating fruits, thus being a strong symbol of sacrifice. Furthermore, palms are considered the “tree of life” as they thrive in harsh conditions. It’s the tree that is mentioned in the Gospel of John’s description of Christ’s triumphal entrance into Jerusalem days before the Last Supper. For this reason, they are the trees that give the name to “Palm Sunday” on the Sunday before Easter.

This strong symbolism was thus adopted by artists using a variety of media. Byzantine mosaics often feature martyrs holding a palm branch in their hands, while the symbol of palm leaves was often engraved on the tomb of the first Christian martyrs. But painters employed this ancient symbol, too. Here are some notable works of art that included palm branches or palm trees as symbols of martyrdom: