Renacavata: The birthplace of the Capuchin Franciscan Order

Photo Courtesy of Capuchin friars of the Marches province

Though the friars were conceived as an order dedicated to asceticism and harsh penance, today they are remarkably warm and welcoming.

Italy is well-known for its rich spiritual history and traditions. Over the centuries, its mountainous and hilly terrain has offered ideal places for hermits, penitents, and monks seeking out seclusion for silence and prayer. One such example is Renacavata, the birthplace of the Capuchin Franciscan Order.

In the Renaissance-era town of Camerino in the Marches region of central Italy is the mother-house of the order. There a tiny hillside church and simple friary boast the honorific title of motherhouse of the worldwide order of some 10,000 priests and friars.

The hermitage is located about three miles (5 km) from the city walls – a short drive today, but a vigorous walk five centuries ago. After passing a supermarket and some modern university buildings, the route becomes rural. Though there are few cars, there is a traffic signal as the country road is confined to one lane, hemmed in by a large oak tree on one side and a farmhouse on the other.

While waiting for the light to change, visitors can admire the grazing sheep and cattle and the farmers working the postcard-perfect fields. One wonders if the area was much different back in 1527 when the Capuchin Order was founded just a stone’s throw away.

After a steep climb on a somewhat paved road, at the end of a driveway to the left is the Capuchin church and convent (friary) of Renacavata. 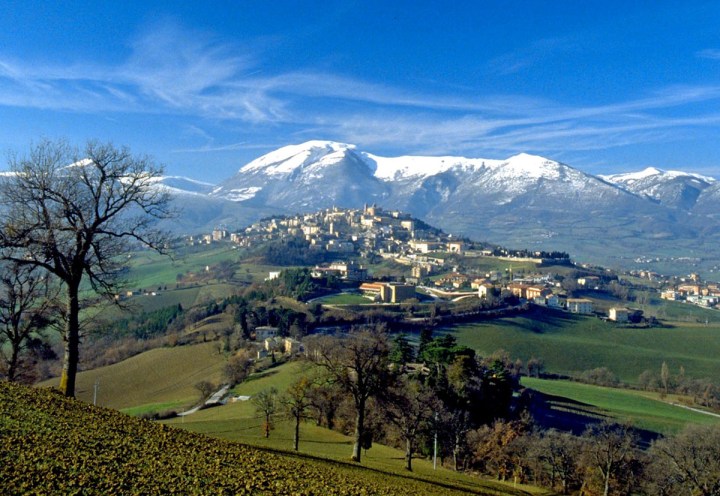 The white stone complex is incongruous with the right side elevated, a chimney toward the middle and a portico and sundial to the left. The pleasant structure blends harmoniously with the quiet green hills and blue sky beyond it.

The church is the original part of the structure and dates back to the late 1400s. Everything else was added organically.

Though small and out of the way, this isolated sanctuary has a large and expansive history.

In the 1520s, a small group of Franciscan friars from this region – Matteo da Brascio, Ludovico and Raffaele da Fossombrone – felt a desire to live the Franciscan life according to a more austere, eremitic manner. As happened, the leaders of their order – the Observant Franciscans – were not keen on a reform movement splintering off from their ranks, which had only recently separated from the Conventual Franciscans.

Fortunately for the young friars, they had the support of the duchess of Camerino, Caterina Cybo. She was endeared to the friars for their tireless ministry to the townspeople who had recently suffered a devastating plague. The friars had been particularly attentive to her husband, the duke, who succumbed to the disease. As such, she gave them custody of the church in Renacavata and the land surrounding it, where they could dedicate themselves to prayer, penance, and strict poverty.

Perhaps more importantly, Caterina happened to be the niece of Pope Clement VII. On their behalf, she sent a letter to her uncle requesting that he grant papal recognition to their new order.

And so it was with the papal bull, Religionis Zelus, dated July 3, 1528, Pope Clement VII granted approval to the fledgling Franciscan movement, allowing them to become a new order.

The unofficial name of the order, Cappuccini, is derived from the slender capuches (hoods) worn by the friars. As the friars went through the streets begging alms, the children of Camerino referred to them as the “little hooded friars.” (Incidentally, centuries later their name was appropriated by consumers of the famed caffeinated beverage; due to its cinnamon-brown color and frothy hood shape, the friars lent their name to cappuccino coffee.)

Though the friars were conceived as an order dedicated to asceticism and harsh penance, today they are remarkably warm and welcoming.

There is a rope next to the door. If you pull it, eventually you will hear a thick metal bolt slide open and a heavy wooden beam shift as a friar opens the ancient door. Then you will be greeted with the ancient Franciscan maxim, “Pace e bene!” (Peace and all good!).

As you are welcomed in, you’ll be hit with a potpourri of smells. First there is the scent of old wood and cold stones as you enter the 500-year-old edifice. You’ll probably get a whiff of ash as you pass the ancient fireplace on the right still used by the friars to offer a warm space for visitors in the cold winter months. As you get closer to the kitchen, you’ll surely notice the scrumptious fragrance of Fra Nicolino’s tomato sauce and basil simmering for lunch. In the rear of the refectory, you may smell aging wine wafting up from the cellar below.

There are two side by side communities of friars in Renacavata today: the permanent community and the novices. The permanent friars are mostly elderly. All have shaved heads and long white beards down to their cords (the ropes around the waist with three knots symbolizing the evangelical counsels), and some have large bellies. In addition, Renacavata is the site of the novitiate for the Capuchin provinces of central Italy in addition to other countries in the Middle East, Africa, and northern Europe. As such, spoken languages range from Arabic to French to Icelandic.

The friars are always happy to offer a tour of their premises. Though they dedicate their days to prayer and study, they always make time to receive guests. It usually begins with a visit to the lovely 15-century church. Of note is a brilliant Della Robbia ceramic altarpiece and a handsome wood-carved tabernacle.

Directly above the church is the original friary, an unconventional situation that required special permission from the pope. Apparently, the first friars were not very tall, as visitors over five feet tall must keep their heads down to avoid unpleasant contact with the wooden ceiling beams and rafters. In the 16th century, the friars slept side by side in what appears to be a corridor. A century later, after they acquired more stability and funds, they built small individual cells.

Next is a surprisingly modern museum with centuries-old religious items collected from closed Capuchin churches and friaries in the region. Of note are striking hand-crafted ciboria, reliquaries, and other liturgical objects made by the lay friars (Capuchins brothers not ordained). In line with poverty, they are crafted from wood and straw – poor objects opposed to precious stones or metals. There is a series of more wooden tabernacles similar to the one in the church below. Carved out of wood, they were made to look like Renaissance-era palaces, appropriate for reposing the Lord of lords.

If you arrive around lunchtime, there is a good chance you’ll be invited to a meal – always delicious and abundant. They are freshly prepared, as the friars live off the land behind the friary as they have been doing for five centuries. The bread is made by the friars from local grain; the olive oil pressed from olives on their land; the wine prepared from local grapes. Even the chickens and pigs travel a short distance from their pens to the refectory.

The camaraderie among the friars is palpable, their joy infectious. The Capuchin friars in the birthplace of their order have a special connection to one another and is extended to everyone they receive.