St. Joseph in art: An enigmatic and elusive figure

The original “strong silent type,” St. Joseph was so reticent that for the first 200 years of the life of the Church he was absent from Christian art.

St. Joseph is a fixture in Catholic art and spirituality. Not only is he patron of the universal church, but from real estate to soul mates, young and old invoke Joseph in a steady stream of prayers and litanies. This was, however, not always the case – Joseph spent many a century waiting in the wings for his moment to shine.

Pope Francis has dedicated 2021 to St. Joseph, and in his honor, this series will explore the many different depictions of Joseph that were created as he was called upon, numerous times in the turbulent history of the faith, to protect the Church and its teachings. 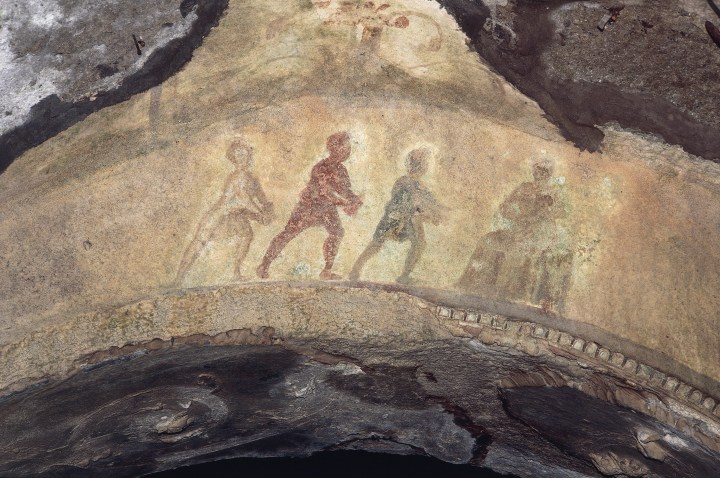 The original “strong silent type,” St. Joseph was so reticent that for the first 200 years of the life of the Church he was absent from Christian art. In their depictions of the Nativity and the visit of the Magi, early Christians seemed to forget Joseph altogether. Christian carvers meticulously rendered ox and ass, stable and straw, manger and swaddling clothes, but left Mary alone to present Christ to shepherds and kings.

Joseph’s invisibility, however, served an important purpose: to emphasize Christ’s divinity and the Virgin birth to the Gentiles.

The Greco-Roman world teemed with mythological gods who sired children, so “Son of God” sounded to the pagan ear as if some lust-struck deity had seduced yet another Mediterranean maiden. Mary’s virginity distinguished the Savior from Perseus, Hercules, or Romulus and Remus, so Joseph gallantly stood aside to let Mary’s purity shine forth. In a world where promiscuity was the norm, where an Emperor married a vestal virgin to denigrate chastity, the miracle of the Virgin birth not only defied the laws of nature but challenged the prevailing zeitgeist.

Furthermore, the Christian message is that Jesus, though born of a woman, was God. Pagans religions had scores of demigods and deified men, but God-made-Man, fully human and fully divine was a shockingly new concept for the Empire. Joseph also allowed himself to be upstaged by oxen and extras to avoid confusion about Christ’s paternity, so the Church could proclaim the fulness of truth in all its splendor.

In 380, however, Emperor Theodosius proclaimed Christianity the sole religion of the Empire, opening a flood gate of new artistic possibilities. Fifty years later, Joseph made his artistic debut in St. Mary Major, the first Western church to be dedicated to the Mother of God. Joseph appeared on the iconographic stage in the triumphal arch, where he was depicted five times, more even than Mary. His first scene takes place in the mosaic of the upper register where he balances Mary of the Annunciation with his own angelic encounter. Joseph is portrayed as a young man with dark hair and beard standing outside his house wearing a short tunic and orange sash, the costume of an imperial attendant. In this image, the Gospels of Luke and Matthew converge: absorbed in divine conversations, Mary and Joseph are assigned their respective missions in tandem.

In the Presentation of Christ, Joseph leads his little family into the temple, clearly the head of the household. The same scene highlights Joseph’s privileged communication with the Lord, as he receives the warning dream to save his family.

Immediately below is a surprising scene from the apocryphal Gospel of Pseudo Matthew, where an Egyptian tribe recognizes Christ as God. Here again, Joseph stands before Mary, his raised hand protectively indicating his son. He is also present amidst the three kings, standing on the left looking out toward the viewer while seeming to usher the magi toward Christ.

A century later, Joseph reappeared in Ravenna, in a carved ivory episcopal throne made for the church of San Vitale. The decoration united the two dreamers of the Bible: Joseph of Genesis and Joseph of Nazareth. Most of the relief panels are dedicated to the elder Joseph, but the three extant scenes of the Nativity, the Epiphany and an apocryphal tale demonstrate the increasing importance of the silent saint.

Details drawn from the apocryphal Protoevangelium of James embellish the scenes. In the Nativity panel, Joseph watches over the infant while Mary heals the withered hand of the midwife Salome, who is punished for not believing in Mary’s virginity.

The iconography repeats the theme of chastity in the panel of the “bitter waters,” where, in the Protoevangelium, Mary and Joseph are accused of unchastity, and to prove their innocence they must drink of a poisoned cup. These early works, precious and beautiful, commissioned by and for pope and prelates, were carefully planned to include St. Joseph in Christian devotion, while avoiding confusion regarding fundamental teachings.

These first images set the stage to introduce St. Joseph as a reoccurring character in the history of Christian art, who would then develop into one of the most multifaceted saints in the hagiographic firmament.