A Holy Week like no other in Southern Italy

Just as they have for hundreds of years, the faithful line the streets to watch the procession and join in the prayer.

One of the most touching times of the year in Italy is Holy Week. Though there are many diverse traditions throughout all of Italy, those in Southern Italy are particularly striking.

The Holy Week rites in the South date back to the era of Spanish dominion. Before Italy was united in the latter half of the 19th century, Southern Italy was under the Kingdom of Spain. The Spanish rulers left their mark in many ways, particularly in the rich traditions of Holy Week.

One region especially known for its rituals is Apulia (Puglia in Italian.)

The rites – mostly concentrated around the Triduum – are organized by “confraternities” connected to the town parishes. Each parish has its own unique confraternity, something akin to a fraternal association.

A noticeable aspect is the clothing they don, something between a tunic and a religious habit. It is known as the “Paranze” in their dialect.

In one confraternity associated with the Church of the Carmine in Mottola (near Taranto), the men vest in white tunics with elaborately embroidered lace borders. They wear a beige-colored mantle with a brown scapular barely visible beneath it. Their heads are covered in a white hood with eye holes cut out, and a crown of thorns is placed on their head.

They process barefoot and carry different instruments of the Passion of Christ, such as ladders or spears. Some carry clappers (known as the Tric Trac in their dialect), which they occasionally rattle.

The crown of thorns, going barefoot, the face covered out of humility all originate in seeking to do penance, in imitation of Christ who went to the cross on Good Friday.

The rites begin at the conclusion of the Holy Thursday Mass. Two brothers vested in the Paranze walk out of the church preceded by a gentleman wearing a dark suit and holding the Tric Trac to announce their arrival. They process slowly through the town, stopping in each church for devotion. 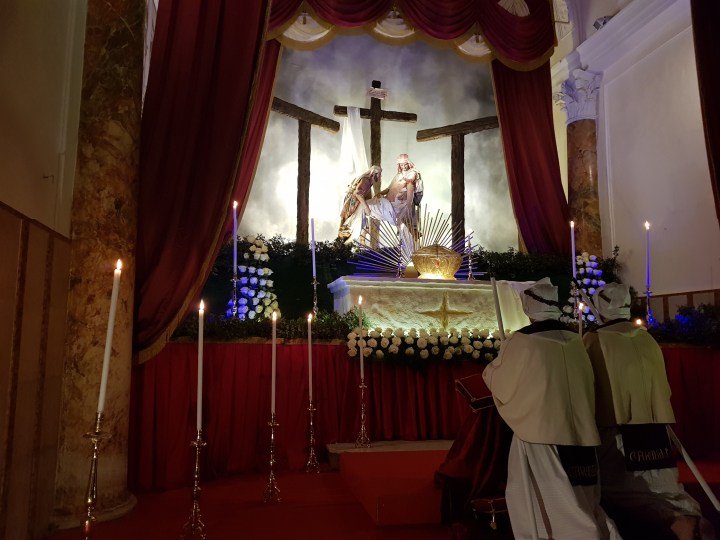 In the days leading up to the Triduum, each parish has been lavishly decorated. They are filled with flowers that emit a beautiful fragrance. Different scenes pertinent to the liturgical season have been created.

The main procession takes place on Holy Saturday. This is a large event involving much of the town. It begins at dawn at the Church of the Carmine and ends at noon. All confraternities participate. There are hundreds of men and boys dressed in the same Paranze tunics, as well as women and girls wearing a similar one.

The procession is slow and somber. The pace is two steps forward, followed by one back. It is preceded by a large marching band that plays melancholy funeral music with brass instruments and drums. The music was written specifically for the Holy Saturday procession, some pieces written centuries ago.

At the center of the procession is the presence of twelve Mysteries – statues depicting the Passion and Death of Jesus. The statues are affixed to wooden boards supported on two planks and carried on the shoulders of two pairs of brothers.

Originating in an era in which the people were mostly illiterate and could not read the Scriptures themselves – or understand the Latin read during the Mass – the graphic statues served to communicate the story of Christ’s Passion and Crucifixion. It’s almost a reenactment of the sorrowful mysteries of the Rosary.

The penultimate Mystery is that of the “Dead Christ,” a statue of a bloodied Christ lying in a coffin draped with a veil. He is preceded by the high council of the confraternity and escorted by Carabinieri — military police officers in full ceremonial uniform.

The final Mystery is that of the “Addolorata” – a tall statue of Mary, Our Lady of Sorrows. She is vested in a beautiful black dress and veil, she is looking upwards and weeping. She is accompanied by four sisters dressed in black dresses and veils symbolizing mourning. As she passes by, the people on the side of the road kneel and make the sign of the cross.

Though less common today, in times past, the faithful would often be moved to tears at the sight. Gazing at the Sorrowful Mother, women would recall a son who died fighting in a war, a husband forced to emigrate to find work, or a child lost to a disease.

The procession slowly winds its way through the town, stopping to bring the Dead Christ and Addolorata mysteries into each of the city parishes for a few minutes of prayer and reflection. City policemen are on hand to stop and redirect traffic as the winding train of participants blocks intersections and city streets for hours at a time.

At the end, in the rear of the procession, are the mayor and city council members, wearing dark suits or dresses with a tricolor sash over their shoulders. A priest holds a wireless microphone and leads the Rosary, chaplets, or other litanies while an assistant pulls a speaker. A crowd of lay faithful conclude the procession. The faithful lining the streets to watch the procession join in the prayer. As it passes, they then follow the procession.

Though the rites originated in an era of popular devotion and heartfelt religiosity, they continue largely due to tradition and a desire to keep the folklore alive. All the same, the elaborate pageantry, mysteries, and rituals remain striking, even haunting. And the message they convey is that even though Christ died, he will rise again.