St. Francis had a vision that the Virgin Mary asked him what grace he desired. His answer: that all who visit his church would receive a plenary indulgence – a full pardon for their sins.

On August 2 of each year, the “Pardon of Assisi” is celebrated in Assisi in the Church of St. Mary of the Angels. This church is also known as the Portiuncula, which means, “little portion of land.”

Saint Mary of the Angels is conceivably the most important Franciscan sanctuary in Assisi for the memories of Francis that it contains. He was so fond of the little church that he once said to the brothers, “If anyone should evict you from one door, return through another one.”

St. Francis lived here with the brothers in community and he considered it his home base. After St. Clare left her family on Palm Sunday, 1212, she met Francis here in the Portiuncula where he gave her the tonsure. Finally, here Francis died on October 3, 1228.

According to the traditional account, in July, 1216, St. Francis was praying in the Portiuncula, when he had a vision of Jesus and the Virgin Mary surrounded by a host of angels.

Mary asked him what grace he desired, to which Francis replied that he desired the complete forgiveness of all sins for everyone who came to his beloved little church. Mary replied that he should go to the pope, inasmuch as he was the Vicar of Christ, to request such an indulgence.

Francis then went to Perugia, where Pope Honorius III had just been elected pontiff after his predecessor, Pope Innocent III, died. Francis made his request that anyone who journeyed to St. Mary of the Angels would receive a plenary indulgence – a full pardon for their sins.

Such a request was unprecedented. There were only a few ways to receive a plenary indulgence at that time – by making a pilgrimage to one of the great basilicas in Christendom such as St. Peter’s in Rome, St. James in Compostela, St. Mary Magdalene in France, or by making the “queen of all pilgrimages” to the Holy Land. It was inconceivable to attach a plenary indulgence to a wayside country church.

Perhaps miraculously, Pope Honorius granted Francis his request. In a nod to the doubters, however, he limited the indulgence to just one day a year – August 2.

How to receive an indulgence

To obtain the Assisi plenary indulgence, the faithful should:

The plenary indulgence can be requested for oneself or for the deceased.

A pilgrimage to St. Mary of the Angels church

Today, those visiting the church of St. Mary of the Angels will discover a large, grandiose basilica. The original church, the Portiuncula, is housed underneath the dome of the basilica.

The first basilica was built between 1569 and 1679, but was severely damaged by an earthquake in the 19th century. The current basilica was rebuilt in 1909 and declared motherhouse of the Order of Friars Minor (OFM). All the ornamentation on and inside the Portiuncula was added after Francis’s death.

Behind the Portiuncula is a little chapel that marks the place where St. Francis died on the night between October 3-4. To the right is a corridor through a rose garden where, according to tradition, Francis rolled around to overcome a temptation. The roses today grow without thorns on the stems. Beyond the garden is a chapel built over the area where St. Francis slept in his hut. 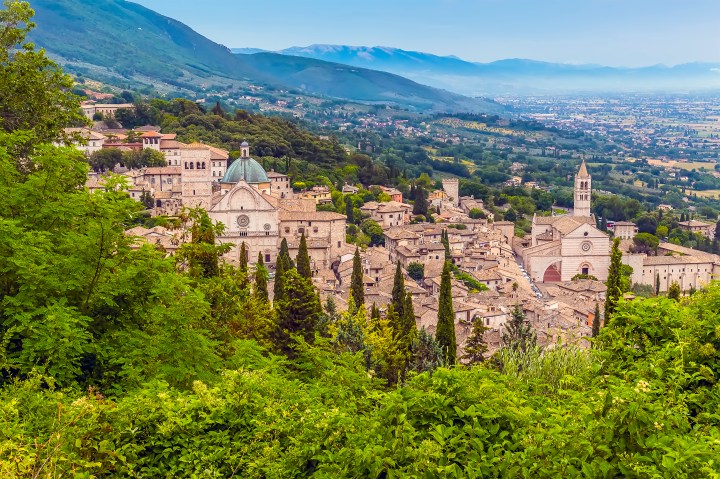