Pilgrims journey to what tradition says is the Holy House of Mary, carried by angels from Nazareth to Loreto, Italy.

Since the late 13th century, the Holy House and the Sanctuary of Loreto have been one of the most important pilgrimage destinations in Europe and in the world.

The Holy House of Loreto

According to the ancient tradition, the Holy House was carried by angels from Nazareth to Loreto during the night of December 9, 1294, and placed along a road among a field of laurel trees. Its name derives from lauretum, the word for laurel in Latin.

Since then, the faithful of all classes and backgrounds have been journeying to the Holy House of Mary. Hostels and other accommodations sprung up to offer place of accommodations for weary pilgrims.

In time, a large basilica was erected to accommodate the huge crowds desiring to come and pay homage to the house of Mary in which “the Word became flesh and made his dwelling among us” (John 1:14). Popes and bishops commissioned the best artists to embellish the basilica, the Apostolic Palace, and the Holy House. Renowned artists, like Bramante and Lotto, spent years working and leaving their testimony in precious sculptures and paintings.

It is documented that over the centuries at least 150 saints and blessed have made a pilgrimage to the Holy House in Loreto. Other illustrious personages – like Frederick III, Galileo, Chopin, Toscanini, Mozart, Montaigne, Goethe – have also come out of devotion. 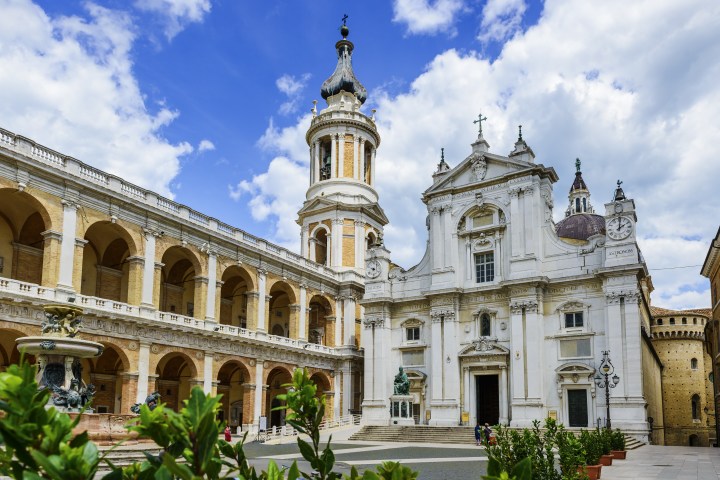 The Way of Loreto (Via Lauretana)

Though most modern pilgrims make the journey via train or automobile, in times past, most pilgrims walked. Since the end of the 16th century, the road they took was known as the Via Lauretana or the Way of Loreto.

Today, the five-century-old pathway has been resurrected. The Way of Loreto begins in Assisi and ends in Loreto. At roughly 165 kilometers (100 miles), the walking journey takes seven or eight days.

The route intersects nature and culture with spirituality and religion. Whether by way of the countless roadside chapels and grandiose basilicas, or by marveling at God’s creation, pilgrims regularly testify that it renewed their faith and blessed them with special graces.

The Charta Peregrini, or Credential, is an important document for the journey. In times past, it served as an official document to certify the pilgrims as such, confirm their identities, and prove they actually made the journey. Today it serves largely as a personal keepsake.

The Credential is stamped at each stage of the Camino, and serves to receive the Testimonium (certificate of pilgrimage), at the final destination. It can be obtained through the Confraternity of the Sacre Stigmata of San Francesco of Macerata, authorized by the Pontifical Delegation of the Holy House of Loreto.

• Brotherhood of the Sacred Stigmata

The Way of Loreto is organized by the municipality of Loreto and a Camino association. There is plenty of information online:

• Guide “Pellegrinando” (downloadable from the site)