A tale of two Canterburys

One is the grandest cathedral in England, purged of its sacred relics during the Reformation. The other is a Catholic parish church, humble in appearance but huge in sanctity.

When Geoffrey Chaucer and his merry band of pilgrims journeyed to Canterbury, their destination was the shrine of St. Thomas Becket. Nowadays there are very few visitors of any description. With COVID-19 the sight of a bare face in the cathedral is rare, let alone pilgrims approaching with bare feet or taking the last 100 yards on their knees.

Especially for Catholic pilgrims, most of the magic was lost after the Protestant Reformation, when St. Thomas’ tomb was destroyed and the cathedral was taken over by the Church of England. Without any relics or sacred souvenirs to sell, the cathedral imposes an entry fee instead. Perhaps those monks in the olden days were overcharging for the highly diluted blood of St. Thomas Becket, but at least pilgrims were able to take something home. These days you mark the occasion with a generic mug or tea towel. The modern relics that are for sale tend to be bits of Purbeck marble from the building’s stone yard rather than from any holy person.

It costs almost $30,000 a day to run this majestic site. It’s a museum to Catholicism without the extras, such as Stations of the Cross and confessionals. The whole city is in a way sacred, as it was the first part of Anglo-Saxon England to become Christian. Pope Gregory the Great sent St. Augustine, the prior of a Roman monastery, in 597 to tame the pagan tribesmen. The earliest cathedral was founded then, with other buildings springing up soon after. Just one year later there was St. Augustine’s Abbey. This is now not even Anglican; thanks to Henry VIII it’s a ruin. It does have some interesting graves still, including that of the first Archbishop of Canterbury from Asia – St. Justus of Tarsus, who died there in 690. 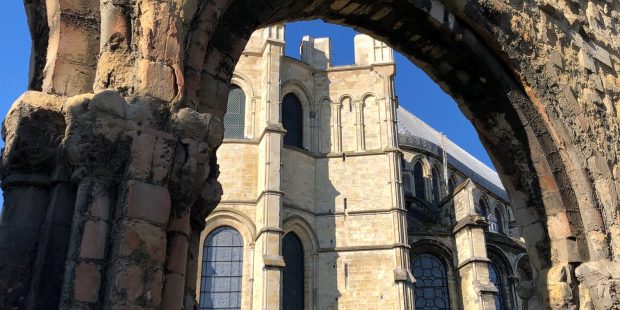 A visit to the nearby Church of St. Thomas of Canterbury

For the living tradition of Roman Catholicism, the true Canterbury is just round the corner from the cathedral. There are no wooden gates to protect this church, located at the end of an unpromising alleyway. It’s the only Catholic church in Canterbury, and it’s easy to miss.

The Church of St. Thomas of Canterbury has Stations of the Cross, confessionals, images of the Virgin Mary and authenticated relics. It also has homeless people enjoying its meager garden. The old-fashioned spirit of charity thrives in the shadow of the cathedral tower.

This is the other side of the pilgrim’s journey to Canterbury, and yet very few visitors of any sort make it here. Especially inconspicuous are relics that would once have been the pride of the nearby cathedral. These are bones of St. Thomas Becket, given by a descendant of one of the four knights who murdered the saint in 1170. One of these relics was presented to the Cathedral of San Salvador in El Salvador. It was to mark the assassination of another archbishop at a different altar. St. Oscar Romero was gunned down in 1980. After receiving the relic of St. Thomas Becket, the Cathedral of San Salvador sent vestments of their martyred archbishop to the small parish church in Canterbury.

Nothing similar would be tolerated in the cathedral, although there are glimmers of hope. Some of these are false. It’s exciting to see a memorial with a cardinal’s hat on it. This was the last thing that the post-Reformation cathedral would have permitted. Henry VIII was outraged when Pope Paul III made Bishop John Fisher a cardinal, thinking that nobody would dare martyr a prince of the church. Henry’s semi-humorous response was that he would send Fisher’s head to Rome instead. The cardinal’s hat in the cathedral actually belonged to a French Protestant émigré who had started out as a Catholic prelate.

More encouraging as an indication of reconciliation is a notice near the demolished shrine of St. Thomas, which bluntly states who the villain of this destructive episode was: Henry VIII.

King Henry’s distant, indirect descendants are still fulfilling his vision. Displaying the Anglican belief in monarchs, not popes, as head of the Church are a couple of statues near the cathedral’s west entrance. Standing out, as the stonework is only six years old, are the familiar features of Queen Elizabeth II and the late Prince Philip. There has been a lot of talk about erecting a statue to commemorate the recently deceased Duke of Edinburgh. It seems that the statue already exists, well ahead of time, but not enough people have made the journey to see it.