Known around the world for its annual music festival, this town in the Umbrian hills of Italy has a rich cultural and religious history.

Spoleto is located in southeastern Umbria and is one of the Umbria’s most fascinating towns. Its long history, cultural heritage, and artistic events make it one of the region’s most popular tourist destinations.

When many hear of Spoleto, they might associate it with music and opera festivals. Indeed, the “Festival of the Two Worlds” has been hosted in Spoleto annually since 1958, while its sister city, Charleston, South Carolina, has done the same in the “other world.” 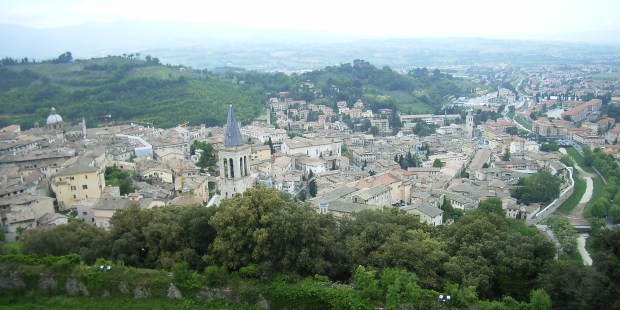 Beyond its reputation as a city of culture and art, Spoleto has a history of unique spiritual and religious sites.

Nestled in a forest above Spoleto is an area known as Monteluco. It is unique for its particularly dense forest of ilex and oak trees and a Franciscan hermitage that has been there since the time of St. Francis.

The name is derived from the Latin words, monte (mountain) and lucus (sacred wood), and it was venerated in pre-Christian times by ancient Umbrians. So struck were the Romans by the forest, they passed a law in the 3rd century BC making it illegal to cut down a single tree. The stone tablet on which the laws were engraved is still present in the forest.

In the steps of St. Francis

After the Christianization of the region, hermits and Benedictine monks established hermitages and oratories on the mountain. The one founded by St. Francis in the 13th century serves as the postulancy today for the OFM friars of Umbria.

St. Francis always felt close to Spoleto, as it was closely tied to his conversion. While en route to fight in a crusade, he stopped in Spoleto to overnight. That night he heard the voice of the Lord speak to him asking why he was bent on “serving the servant and not the Lord.” The next day, Francis renounced his pursuit of war and left his armor and horse with a knight he was traveling with. He returned to Assisi and began to earnestly seek the will of God.

The cathedral, dating from the 12th century, features a lovely Romanesque façade and a magnificent fresco cycle on the life of the Virgin Mary in the apse by Fra Filippo Lippi. The interior is also noted for its mosaic facade, Cosmatesque floor, and altar cross. There is a diocesan museum near the cathedral.

Preserved within the cathedral is yet another sign of St. Francis: a letter written in his own hand  – one of only two that exist – to Brother Leo.

Not far from the cathedral is the dominant fortress (Albornoziana Rocca) towering over not just the city, but over the entire Spoleto Valley. Near it is a belvedere with an inscription attributed to St. Francis, “Nil iucundius vidi valle mea spoletana” (I’ve never seen anything more cheerful than my Spoleto Valley). Indeed, one glance at the panoramic valley floor below and extensive mountain range will lead observers to agree.

Visit the churches of Spoleto

In addition to the cathedral are several other churches worth visiting: San Pietro, San Sabino, San Ponziano, San Gregorio Maggiore, and San Salvatore. The latter is a 9th-century basilica recognized by UNESCO as a world heritage site. Though San Salvatore is closed due to the earthquake, the façade – a testimony to the Longobard transition from Antiquity to the Middle Ages – is worth a visit in and of itself.

One last site not to miss is the Ponte delle Torri “Bridge of Towers” – a medieval aqueduct. Although it is currently closed to foot traffic due to the 2016 earthquake, it is a marvel of Roman engineering.