We bring our readers an ongoing report of the Requiem Mass of Benedict XVI.

In a private liturgy on the evening of January 4, after thousands upon thousands of people had prayed before his remains, the body of the Pope Emeritus was placed in a cypress coffin with his coat of arms. His papal and episcopal pallia were enclosed with him, as were the coins struck during his pontificate. As well, the formal deed of transfer was enclosed.

At about 8:50 a.m., his casket was brought into a foggy and damp St. Peter’s Square, to the sound of muted applause. It was placed on a platform at the center, aside an exquisitely decorated Easter candle. Archbishop Ganswein and Monsignor Diego Giovanni Ravelli, Master of Pontifical Liturgical Celebrations, placed the book of the Gospels on top of the coffin and gave a final kiss to the coffin.

Those in St. Peter’s Square then began the Rosary with the Sorrowful Mysteries for the repose of his soul, prayed in Latin.

Some 4,000 priests, in white albs and a red stole, and 400 red-vested bishops concelebrated the Mass, along with about 130 cardinals.

Archbishop Georg sat calmly in the front row to the right, praying the Rosary with the faithful.

As the Rosary concluded, the fog began to lift. St. Peter’s Basilica was adorned with an artistic representation of the Resurrection of Christ.

Pope Francis came into the Square in his wheelchair shortly after 9:20, vested and took his place at the Presider’s chair.

The procession with the cardinals and the patriarchs began as the choir sang the opening antiphon: “Eternal rest grant unto him and let perpetual light shine upon him.” Cardinal Giovanni Battista Re incensed the altar and Pope Francis began the Requiem Mass at 9:30.

May your joy be complete

The fog kept St. Peter’s Square frigid on this early January morning, as Benedict was commended to God’s hands.

After the homily given by Pope Francis, dedicated to the role of a pastor, and drawing from the writings of Benedict himself, the Prayers of the Faithful were offered in various languages. The first, in Benedict’s native German, was for his eternal rest.

Cardinal Giovanni Battista Re, dean of the College of Cardinals, celebrated the Liturgy of the Eucharist, offered in Latin.

A large sign of “Santo subito” (“sainthood now,” the chant notably proclaimed at John Paul II’s funeral) was particularly prominent, as well as others spread throughout the congregation. “Thank you, Pope Benedict” was written in German on a large banner.

After the distribution of Communion, Pope Francis then led the Rite of Commendation. Cardinal Re blessed the coffin with holy water and incensed it. By about 10:45, the rite had concluded with the singing of the antiphon “In Paradisum”: May the angels lead you into paradise, may the martyrs come and welcome you and take you into the Holy City … may you have eternal rest.

The cardinals processed into the Basilica.

Pope Francis walked toward the Basilica and then stopped to turn toward the coffin; as the pallbearers reached him, they stopped to lower the coffin for his final blessing and a few words of prayer. He placed his hand on the coffin and lowered his head before it, making the Sign of the Cross. The pallbearers then continued into the Basilica, followed by Archbishop Georg Ganswein, the longtime secretary of the Pope Emeritus.

The 12 pallbearers took the coffin through the red curtain into the Basilica and down to the Vatican Grottoes at 10:50, as the bells of St. Peter’s tolled and solemn, continuous applause from the faithful wished Benedict farewell.

Here are images from the funeral: 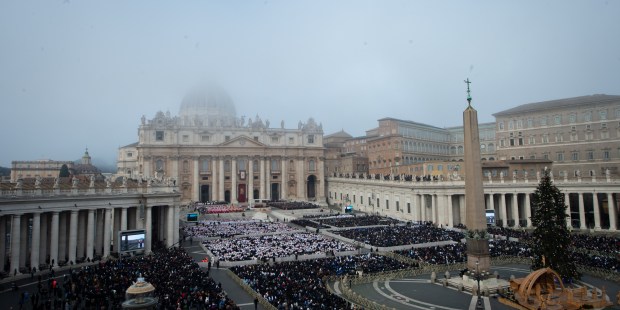