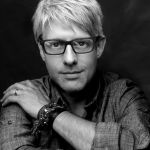 Saints and Sinners: Matt Maher records his journey in faith

For Independence Day: Matt Maher’s “A Future Not My Own”