Does the kind of selfie we post really reflect our personality? 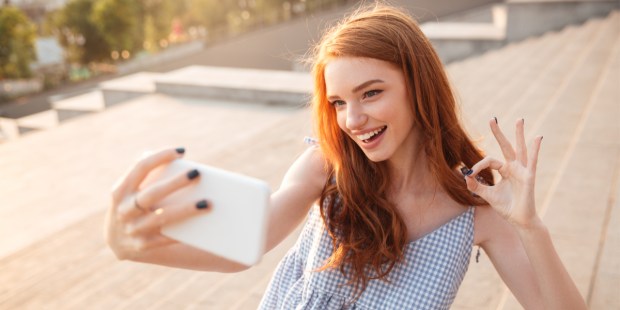 Millions of selfies are shared every day on social media. What do these photos really say about us?

Alone or among friends, at any time or any place, we take a lot of selfies. But do we really understand what this omnipresent activity is all about? Elsa Godart, philosopher, psychoanalyst, and author of I selfie, therefore I am, helps us look deeper at the subject.

Far from fading out, the wave of selfies seems to be more popular than ever. How would you describe this phenomenon?

The word “selfie” first appeared in 2002 in an Australian internet forum. However, it was not commonly used until 2012, when it became a dazzling success the world over and definitively made its way into dictionaries. The term is derived from the English word “self” (which means “oneself” and sometimes includes the nuance of doing something “by oneself”) and refers to taking a photograph of yourself with that hybrid object the telephone—screen—camera—computer. From the pope taking a selfie, to personalized selfies, to the (sometimes injurious) falls caused by over-tilting the stick selfies, to the risky selfies from the tops of skyscrapers (like those of passionate urban Russian climber Angela Nikolau), to the selfies young people blast out in Snapchat … In sum, there is no doubt that a selfie says something about us. And it continues to reinvent itself and  gain popularity.

Is a selfie emblematic of the new digital era?

New technologies alter not just the way we communicate, but also the way we behave. Human beings are changing radically in this new kind of relationship with ourselves and with our world. However, a selfie published in social media hoping to get a “Like” brings to the fore a series of questions generated by this digital revolution: As a digital image—who am I now? Is the image (still) a language? Can I establish a bond with others?

In 2001, 86 billion photographs were taken around the world, most of them analog and developed on paper. In 2012, a hundred times more were taken, most of which were never developed, but were put into circulation on social media (Facebook, Instagram, Twitter). When I started working on selfies, I never imagined that I would be faced with so many different problems. I decided to approach the question of the metamorphosis of the subject, from a philosophical and psychoanalytical perspective.

It took centuries for human beings to learn to say “I.” Will a few years be enough to make that singular “I” fade away into the “ego-sphere” of today’s environment?

The selfie does not mark a break in the perception of the self with respect to the past. It is a metamorphosis that, strictly speaking, is a change of form. It is the sign of an exacerbated individualism. If you don’t mind, I will give you a crash course look at this philosophically: With the Greeks, there is no subjectivity. Why? Because there is no self-consciousness. There is only the Citizen and his relationship to the City. The notions of interiority and introspection come with Christianity, especially through prayer, which is an interior dialogue with God. The first person in Western history to say “I” is St. Augustine in the Confessions, although the concept of Christian community continues. In the 12th century, St. Bernard of Clairvaux, who returns to the theme of grace and free will, marks another stage in the emergence of the subject, both in self-consciousness and in the question of self-determination with or without God. In the 17th century, Descartes, the father of subjectivity, states: “I think, therefore I am.” Another leap in time brings us to Husserl, who reveals the necessary mediation of the other in relationship with the I. Finally, a word on psychoanalysis which, with the notion of the unconscious, puts into question the concept of the “subject that is conscious of him or herself.” Now, the “digital self”— fruit of the digital revolution — is, in my opinion, the combination of the conscious self (Descartes) and the unconscious self (Freud), to which the screen is added, creating an “augmented” subjectivity, which, however, does not make one question their reality.

So the person who is connected to the screen but remains emotionally distant—doesn’t this situate them in an undefined and detached relationship to themselves?

Detached from themselves, I’m not so sure. But it is clear that the arrival of the smartphone is having significant consequences: space-time is reduced to the benefit of immediacy, rational discourse is suppressed to the benefit of the fleeing image. This hinders our capacity to immerse ourselves in our inner self. Introspection requires time, time that is not dedicated to efficiency or productivity. The reign of the ephemeral and the evanescent no longer facilitates the re-appropriation of the self in the form of an interior story, of a constructed thought, a philosophical question, a monologue. With the selfie, our existence lies essentially in an image. And by playing at being nothing more than representations of images, we end up being nothing more than the theme of our representations.

Is the virtual world for teenagers an escape or a means of protection? Does it allow them a smooth transition to adulthood or does it hamper it?

Adolescence is characterized by a strong search for identity (search for models, experimentation with clothing style, etc.), when the physical transformation is often difficult. Selfies can be a way of playing with one’s image; that is to say, it can be an act of resistance, of affirmation of a unique identity in a hyper-normalized society where we all walk at the same pace. The virtual image can be both support and camouflage. At the same time, it creates new conformism and imposes a tyranny of appearance.

The omnipresence of the screens on which children and adolescents are raised can also create a feeling of omnipotence and impunity. Screens do not teach a sense of effort, time commitment or responsibility. Our actions have no consequences on the internet. Moreover, digital neo-language is often reductionist: the emoticons or the images shared in Snapchat do not give an account of the amplitude and the singularity of the emotions, of the experience, of the attitude. But that’s not what they are all about. Words are also limited, but they allow for a greater richness of expression. Need we add that social media do not allow for the (re)establishment of authentic relationships?

You speak of “narcissistic fragility.” Aren’t parents partly responsible for that by constantly photographing their children?

Very often when parents spend time photographing their children, they stop being with them directly. They are hidden behind the device. The young child, who is going to be seen in a photo, is a prisoner of the screen and of an image he or she may not be aware of yet. They become a trophy-object for the glory of their parents.

Once again, it is not a question of condemning all digital activities, but of contextualizing them and nourishing a critical perspective that makes us the “owners of the machine,” anticipating possible consequences that we would not have imagined. I propose that the “geek” generation as well as the older ones get educated in the digital world. Let’s figure out how to set limits, how to combine a culture of the written and the image. Let’s act without fear—with prudence, justice and moderation.

Read more:
This is what my family is doing with smartphones and tablets, and why