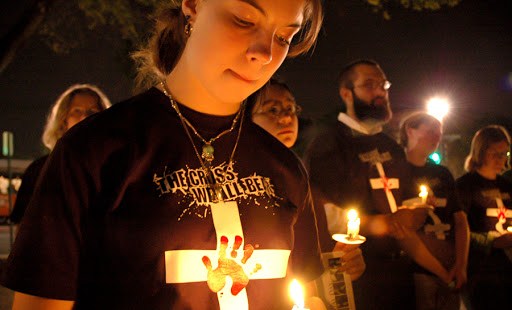 Despite commencement honors to Barack Obama in 2009, Notre Dame’s Right to Life Club has grown to one of the largest pro-life student organizations in the country.

About 50 students gathered yesterday in the Basilica of the Sacred Heart on the campus of the University of Notre Dame for the semester’s first Right to Life Mass.

When the pro-life issue is raised in relation to the University named after Our Lady in South Bend, Indiana, Notre Dame’s 2009 honors to President Barack Obama loom large. But today Notre Dame’s Right to Life Club is one of the largest pro-life student organizations in the country, as well as one of the most active and innovative.

Besides praying and sidewalk counseling at a nearby abortion clinic one day a week and praying the Rosary for life, students with the RTL organization volunteer extensively at the Women’s Care Center, a pregnancy resource center in South Bend founded by former Notre Dame professor Janet Smith.

Mary Liz Kaltenbach of the Women’s Care Center told The Cardinal Newman Society that many students from Notre Dame’s Right to Life volunteer with the organization’s Crib Club, which provides cribs, diapers, clothing and other baby items for pregnant mothers under an incentive system that rewards participation in parenting classes, prenatal care and other programs. She said the students do whatever they can to help, which includes stocking the shelves and providing childcare during parenting classes.

She also said that twice a year, Notre Dame Right to Life hosts a baby shower for women who had considered abortion and decided to parent. “The students are so active,” she said. “We’ve all been impressed.”

Kaltenbach, a former president of NDRTL, said that ironically, since the Obama honors in 2009, the club has become increasingly creative and more active. “They’re taking the club to a new level by finding really creative ways to reach out,” she said. “They show a great joy for life.”

In addition, Notre Dame President, Rev. John I. Jenkins,C.S.C., led Notre Dame students, faculty and staff in the 2012 March for Life in Washington, D.C. That attracted 350 Notre Dame students to attend the March, but in January 2013 the RTL club had more than 600.

Erin Stoyell-Mulholland, the current president of NDRTL, told The Cardinal Newman Society she’s thrilled by all the interest in the group, which has as its first mission upholding the teachings of the Catholic Church.

The group is partnering with the theology department on a one-credit class called “Theology Outside the Classroom.” It includes a variety of pro-life seminars such as “A Theology of Working in Business in Laborem Exercens” by Professor Martijn Cremers of the Mendoza College of Business, “Dating for Life” with philosophy Prof. David O'Connor, and “Building a Culture of Life” by political science Prof. Patrick Deneen. And that’s just what they have scheduled for this month.

“We have a lot of great pro-life faculty on campus,” said Stoyell-Mulholland. “It’s a great opportunity for students to learn more about a variety of issues.”

The club has also established a faculty mentorship program for students with a professor in their discipline.

Stoyell-Mulholland said the club held an event last year, open to all students, called “Write from the Heart,” in which students wrote letters of support and congratulations to women with a crisis pregnancy. “For a lot of women, it’s the first time they heard congratulations,” she said. “It’s really simple but it seems to have a big impact.” The club plans to continue its efforts at celebrating life.

In addition to the monthly Right to Life Mass in the chapel and praying the Rosary at a nearby abortion clinic, many students attend Eucharistic Adoration once a week for an hour for the unborn as well as mothers.

“Prayer is also very important,” Stoyell-Mulholland said. “Prayer is the foundation of the pro-life movement.”