Archbishop Calls for Equal Rights for Christians in India 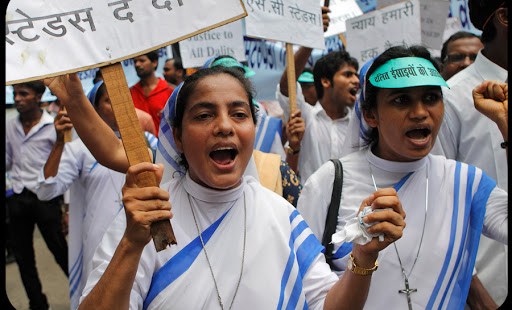 Hindus fear that if Christian dalits are granted their rights many Hindu dalits might convert to Christianity.

Archbishop Anil Couto heads the Archdiocese of Delhi. On Dec. 11, 2013, he was part of a large protest march in India's capital, with demonstrators demanding equal rights for low-caste Christians and Muslims, known as dalits, or "untouchables." Approaching the main road from the side lane, the peaceful march became victim of police brutalities, with police beating numerous protestors, including priests and nuns, and blasting people with water cannons loaded with muddy water. Archbishop Couto, alongside other members of the country's Catholic hierarchy, as well as top Protestant and Muslim leaders, was among more than 400 demonstrators who were detained by the police. Demonstrators demanded that affirmative action with regard to employment in government and the educational system, as well as access to a range of social benefits be granted to Christian and Muslim dalits, just as this quota system benefits Hindu, Buddhist and Sikh dalits. The Indian Constitution prohibits discrimination based on religious affiliation. Dalits account for more than 65 percent of India's 27 million Christians. Archbishop Couto spoke with Catholic charity Aid to the Church in Need (ACN) on Dec. 18, 2013.

What prompted the protest at this particular time?

We have been holding regular protests demanding equal rights for Christians and Muslims for many years. Plus, Dec. 10 marked the 2013 UN Human Rights Day. This is also a time when the Indian Parliament is in winter session. Our hope was to get the attention of the government and some political leaders who sympathize with the cause so that the issue might be raised in Parliament, thus building pressure on the government.

How do you explain the highly aggressive response of authorities to the protest, the first time in more than 15 years that such violence was used to quell protests on behalf of Christian and Muslim dalits?

The aggression on the part of the government was triggered because we actually violated the security barrier leading to the Parliament. Protests beyond that barrier are halted by the police with sticks and water cannon. Had we persisted the police might have used even more violent means. But we felt we had to make this push because otherwise nobody would pay any attention. We had to do something drastic, even if it meant breaking the law. We had to take the risk.

How significant is the fact that this is a cause that unites Christians and Muslims? Could it have positive ramifications for Muslim-Christians in India and Pakistan, for example, or even in the Middle East?

I do not know what kind of impact our joint efforts would have beyond India. In Pakistan, Christians are a tiny community faced with many fanatical groups. Of course, I hope this relationship in India between Christians and Muslim can have an impact beyond the country. But here, of course, Christians and Muslims are both minorities that are suffering discrimination. That makes for a very particular situation and we generally enjoy a good relationship with each other.

In 1950 Hindu dalits were granted their rights, which were subsequently granted to Buddhists and Sikhs. How do you explain the resistance of so many successive Indian governments to bringing justice to Christian and Muslim dalits?

That resistance stems from the Hindutva ideology that India must be strictly Hindu and eventually become a Hindu theocratic state. Adherents propagate the view that Islam and Christianity came from outside the country; that these religions were not born here. Adherents of faiths that originated in India find greater toleration, such as Sikhs, Jains and Buddhists. Christians in particular are discriminated against because there is a fear that if Christian dalits are granted their rights many Hindu dalits might convert to Christianity. That certainly is the concern on the part of rightwing Hindu nationalist parties.

Does Christianity hold out something special?

Yes, the Christian faith upholds in a particular way the dignity of the human person. There is enormous power and strength that flows from the relationship with Christ and the Gospel. The Lord died for us! We are saved by His sacrifice! Besides spiritual nourishment, the Christian Churches also provide great social benefits and they work hard for social and political reform. This holds great appeal for people—and hence some right wing Hindu factions worry about a great exodus from Hinduism toward Christianity.

There are some reports that some Christian dalits, though practicing their faith privately, publicly present themselves as Hindus in order to get government benefits. Is this a big issue for you?

There is an injustice; Christians are denied their constitutional rights, and this is a way to get around the law. I am not aware of a great number of people doing this, however. There are many people who stand up for their faith, and are willing to forego economic and social privileges.

On Dec. 12, you and other Christian leaders were able to meet with Prime Minister Manmohan Singh. What came out of your conversation with him?

We met for only 10 minutes, but we were encouraged. When we apprised him about the beatings and the violence his response was: “I am very sorry about it.” He assured the delegation that he will put the matter before his cabinet and that he will make further efforts to put it before Parliament. But promises have been made so many times before. The issue is currently in the hands of the Supreme Court, which is waiting for the government to say yes or no to the granting of rights to the Christian and Muslim minorities. The Court is acting in accord with the recommendation of a special commission set up by the Government for this purpose. It is known as the Ragunath Mishra Commission. It had urged the government four years ago that affirmative action be made religion-neutral. Our question to the government is why they have not said either yes or no to the Supreme Court—the country’s leadership has been silent. But it must act!

What is your view of Gujarat’s chief minister, NarendraModi, the Bharatiya Janata Party’s (BJP) candidate to vie in next year’s elections. He is linked to anti-Muslim violence that left 1,000 dead in 2002. Does he have a chance of becoming Prime Minister? What would the return to power of the Hindu nationalist BJP mean for your cause?

I am not sure if he has a chance. The media are picking him as a winner. There is a hype going on. Going by his track record, he would clearly not be good choice for us. It could in fact be very dangerous for minorities if the BJP is back in power, even as part of a coalition government. They would again start agitating against conversions to Christianity, blaming the Christians for aggressive proselytizing. That is a false claim.

Christian missionary work is going on, but within the provisions of the Constitution. We are free to confess and propagate our faith; and people have the liberty to choose their religion. But the BJP would want to create this kind of psychosis, this public paranoia with the charge that every conversion is a forced conversion and would have to be reported to authorities. Hindu nationalists would find many of the media at their side.

What are the next steps for you and other Christian (and Muslim) leaders in India?

We are trying to come together in this ecumenical effort. We are considering our next steps. We have not yet developed a joint strategy. The Bishops’ Conference is working with the National Christian Council of India and with the Evangelical Fellowship to encourage people to vote for parties with secular credentials and which will uphold the secular nature of our Constitution; yet we are not sure which party, though secular, will openly espouse the cause of dalit Christians (and dalit Muslims). The Congress Party had the best chance of doing it decades ago when it had an absolute majority but it has dillydallied on the issue to the detriment of justice.

Originally published by Aid to the Church in Need.