The Last Couple: An Exclusive Interview 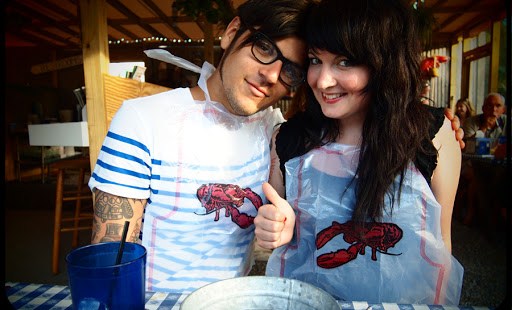 Via Aleteia’s patented “Way Way Forward” Machine, we were able to obtain an exclusive interview centuries into the future with the Last Couple Left on Earth.

We met for Sunday brunch at what is now their own private bistro, a cozy boulangerie in Bushwick, a quaintly gentrified neighborhood in Brooklyn. For reasons of symmetry we’ll call them “Adam” and “Eve,” though we’re not quite sure from whom we’re keeping their identity. They are, by most reputable reports, the last couple left on planet Earth. Between the changes in the economics of sex beginning in the 1960s, the plummeting marriage and birth rates of the early 21st century, not to mention the Redefinition of Marriage Act of 2022 (in which marriage was finally defined by Congress as that peculiar institution having no definition), the human race, apparently, forgot to propagate itself. A robotic waiter delivered our meals, and over egg-white omelettes and lattes, Adam and Eve spoke with Aleteia about intergenerational obligations, dirty diapers, and binge television watching.

I’ll get right to the question that everyone left on Earth–all seven of us–are dying to know: any chance you’ll have kids?

ADAM: Wasn’t it Shakespeare in Much Ado About Nothing who said, “The world must be peopled”? But does it, Will? Really? I mean, I kinda like things the way they are. It’s quiet around here. Peaceful.

EVE: Kids? After reading all those whining Facebook posts from my formerly married or cohabitating friends? I don’t think so. They make it sound miserable, running around all day not even realizing there’s a blotch of regurgitated pears on your shoulder.

The history books tells us that in former times people felt a certain obligation to future generations–you know, to keep the whole human party going?

EVE: Isn’t that what cryogenics is for? But look, despite what I just said, I might like a child one day. Adam helped me create some frozen embryos just in case. Sometimes I think it would be kinda cool to have a little rugrat to dress up and take to birthday parties. But then I think, do we really deserve to keep going as a race? We’ve had a shameful run, if you ask me. I know there’s still people thinking, “Global warming, when’s it going to come?” But make no mistake, it’s coming. Why should I want to bring children into such a world?

ADAM: I’m not sure when we would have time for kids anyway. We both work all day, and after happy hour and grabbing some dinner with friends, there’s not much time left. We go home and catch a little Game of Thrones or Downton Moon Colony and just crash.

Well, what about an afternoon such as this? What we know of pre-modern societies suggests they thought that a Sunday afternoon wasn’t a bad time to spend with kids.

ADAM: I guess. I suppose we could play a few hours of Skyrim together. That would be kinda cool.

EVE: Except when the kid actually wanted something to eat, or have his diaper changed?

ADAM: We could have a rule. No Skyrim until you can change your own diaper. [Pauses reflectively.] I kinda see where you’re going with this, though. The planet is, like, light on human beings. There aren’t even any kids on Skyrim. Makes me wonder if this is how the dinosaurs went out. A couple of velociraptors were probably having a little brunch one day, and poof! They were gone. That’s life, I guess.

Or death, more precisely. You two have been living together now for a couple of years. Ever find yourself attracted to that “alternative lifestyle”?

EVE: To a human being?

EVE: I never got the point of it. My college roommate’s mother married her two Labrador Retrievers. She had this kinda harem thing going on, it was cute. But human marriage? What was it supposed to be all about anyway?

ADAM: I don’t have one of those fringe personalities, you know? Don’t do drugs, don’t smoke, don’t go looking to get married. I’m kinda just your regular Joe. But Eve already makes me feel like I’m the chips to her queso, I don’t need a piece of paper to confirm that.

EVE: Besides, what I’ve read about marriage indicates that couples had the same kind of open-door policy that Adam and I have. If one of them wasn’t happy, they just walked. So why bother getting married?

As a matter of historical record, although marriage did fall into what might be called a form of “decadence” in the 21st century, for many centuries the institution was thought to bind until the death of one of the spouses.

EVE: I’m not comfortable around illness anyway. It’s too depressing.

ADAM: Don’t worry, babe. I’ll text you some love from the Euthanasia Center.

Can I ask where you guys met?

ADAM: “Lusty Singles” was founded back in 2014. The founder, Misty Panders, was inspired by the data showing that most U.S. singles were looking for more, not less, sex. So she decided to facilitate their efforts by founding an organization that could help them meet their special needs.

So your profiles matched?

EVE: Absolutely. We both wanted someone who would never talk about politics, religion, or how dirty the bathroom was.

ADAM: It’s been like the key to our long-term success.

How long have you been together?

ADAM: It’s been crazy. I never thought I could be so domestic. Not that I’m not free to see other people.

EVE: Absolutely, me too.

I want to thank you for your time today.

EVE: Yeah, we were just hanging. Who wants another latte?